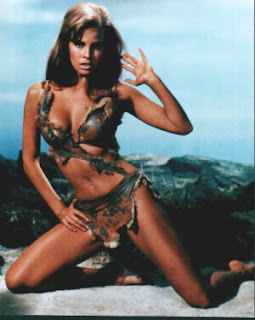 Or woman. This cavewoman, of course, is Raquel Welch from One Million BC, the film that proves beyond any doubt that depilatories existed at the same time as dinosaurs.

But I'm not here to talk about hot cavewomen, although I can think of worse things to mull over on this last cold day of January. No, I'm here to talk about the Geico caveman, the insurance primate who is not half as attractive as Ms. Welch.

Have I completely sold out? Yes, I have, and if Geico wants to send me a check, I will happily spend their money on vodka and art. But as we wait for my unlikely remuneration, let me direct you to this web site.

Here you will discover just how today's caveman lives. You will see what he reads, listen to his iPod, even get a glimpse of how today's metrosexual caveman does the fashion thing. And why, if I'm not getting paid, am I doing this?

Because the caveman's crib is actually my nephew's house. He's a young film maker who has worked with Geico on a number of projects and when they needed a place to shoot this, my nephew offered up his place. So take a look. And as you wander from room to room, think of how my nephew and his wife took an unassuming ranch in northern Virginia, gutted the inside and rebuilt this interior with their own four hands. Pretty cool. And the web site is entertaining, too.

Not as entertaining as Miss Welch in her animal-skin bikini, but then what is?
Posted by David Terrenoire at 8:41 AM 2 comments:

Proof that Hungarian beer can destroy your critical faculties. 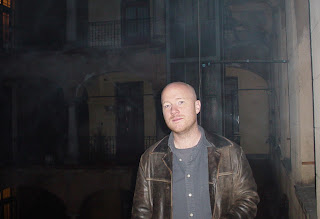 This is Olen Steinhauer, the Edgar-nominated author of Liberation Movements and other highly-regarded novels that you should rush out and buy right now. Go ahead. We'll wait.

OK, now that you're back, let's look at something Olen's done that most people, including my mother, would find incredible. He's read my book and liked it enough to tell others about it, which is not unlike standing on a subway platform yelling at strangers about the joys of lime jello.

Thanks, Olen, you delusional fool. Thanks.

Planetary Update: It should be clear to all of my readers (both of you) that I'm blogging again. I've remodeled and I'll try to stick to my resolve to post only when I see a worthwhile story like if the president eats a bug.

For instance, I've got this bit of shameless self promotion: Jim Born, Jeff Shelby, Cornelia Read (another Edgar-nominee) and I are going to be at the South Carolina Book Festival, February 23 - 25. I understand it's a free event, so if you're in that neck o' the woods, stop by. We'll be the crime writers swimming in the sea of literary nabobs.

As for The Planet, we're going to go slow for a while and see if I can keep from obsessing about this.

Tomorrow: Caveman News!
Posted by David Terrenoire at 6:56 AM 10 comments:

"I thought I was going to get my life together," 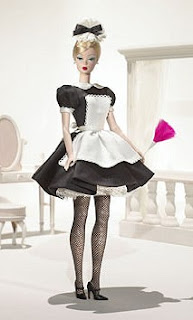 Ronald Doston told the judge. Well now he's got plenty of time to work on that.

After being arrested for the zillionth time for the same crime, the judge sentenced Dotson to 30 years in prison. What was Dotson's crime? He smashed a window of a cleaning supply place on the corner of 8 Mile and Woodward in order to make sweet sweet dummy love to a mannequin.

"I think he lacks social skills," his lawyer said. Ya think? (And if lacking social skills is a crime, why isn't Jeff Shelby behind bars?)

Dotson's been here before. In 1993 he snatched three female mannequins. Seven years later he was arrested again after becoming entranced by a mannequin with bobbed hair in a pink dress.

And who could blame him? Really.

Even though Dotson is an habitual offender, 30 years is a pretty harsh sentence considering the mannequin was asking for it by wearing a French maid's outfit.

"He needs to be kept off the streets," the prosecuting attorney said.

Now, maybe I'm a bit simple-minded, but couldn't this be accomplished by giving the guy his own mannequin and a tub of KY? Because I'm willing to take up a collection.

The judge, master of the obvious, said, "It's clear there is an illness here that needs to be dealt with."

But who's thinking of the victim? Nobody. She continues to be exploited by the store, parading her in the window in that degrading maid's outfit like she was nothing more than an inanimate chunk of flesh-painted plaster. "It attracts a lot of attention," said the store manager/pimp.

Yeah, she sure got Dotson's attention.

If Dotson is intent on making love to something that has no emotions and doesn't move during sex, I have an old girlfriend I could introduce him to.

On second thought, maybe prison is less cruel.
Posted by David Terrenoire at 9:47 AM 2 comments: 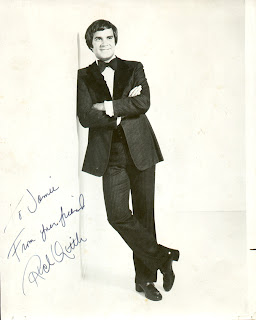 The White House Correspondents' Association, the group that hired Stephen Colbert to provide the yuks at last year's kissy-face confab, have decided that Colbert played a little rough with our Cowpoke in Chief and hurt the little fella's feelings.

Not wanting to bruise the thin-skinned Decider again this year, the WHCA has hired 60's comedy sensation Rich Little and asked him not to make fun of you-know-who or mention the war in you-know-where. Little has promised to confine all jokes to airline food and those wacky hippies. "Not a word about the war," Little said. "I won't even mention Vietnam."

That's right. Young men and women are getting shot at and blown up every day, but the guy who sent them to Iraq is too fragile to face a few jokes from a TV comedian.

Don't get me wrong, I loved Rich Little when I was little. His Nixon is dead-on, but then again, Nixon is dead. So is Reagan and a whole host of other people Little impersonates, which makes me wonder: What happens when all the people you impersonate have joined the choir invisible?

You book a gig with the Liberal Media's White House Correspondents.

Just be sure to lay off the Boy King. Colbert made him cry.

*According to US News, Bush is uncomfortable around women because he loves "to cut a few for laughs, especially when greeting new young aides..." That's Klassy with a K.
Posted by David Terrenoire at 1:55 PM 2 comments:

If Texas didn't exist, we'd have to make it up. 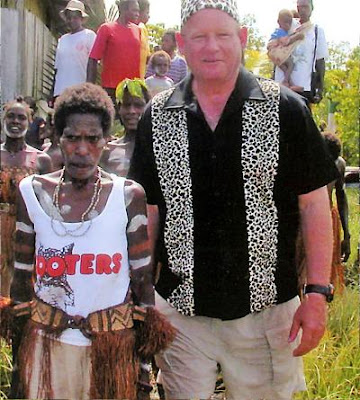 A friend forwarded this story to me and it was too good not to post it.

John Kelso of the Austin Statesman asks if this man is the most politically incorrect person in Texas. I don't know, but the competition has got to be fierce.

Let's say that for now, this guy is in the finals.

Charles Johnson III, oil wealth oozing from his ears, is taking Jesus' commandments to heart and helping clothe the naked, although Jesus didn't say anything about Hooters T-shirts so Johnson extemporized.

Yes, Mr. Johnson flew to New Guinea, where other people have been eaten for less, and handed out Hooters T-shirts to the women.

I love this guy.

That's Johnson up there in the bowling shirt and fez, a look I might adopt for my next gig. In the story Johnson also gives vent to his inner Maragret Mead by enlightening us as to the local customs. Speaking of one woman carrying a pig (not Johnson) he said, "She was nursing that pig when we saw her. A lot of women in New Guinea nurse their pigs to fatten 'em up."

And speaking of pigs, Johnson rides around with a stuffed hog in the sidecar of his motorcycle.
"I stuff him in my sidecar and take him barhopping," he said. "We put dollar bills in his hooves for the girls in the strip clubs."

Johnson has also sponsored topless dove hunts next to a maximum security prison. This means he hires topless dancers to act as bird dogs, fetching the downed birds for the hunters. "When they bring back a dove," he said, "they get a dollar." Nice.

But, according to Kelso, "Perhaps the apex of Johnson's politically incorrect career occurred when he brought a 378-pound Dallas transvestite named Rhapsody as his date to his 20th high school reunion in Amarillo.

"She was a great date. Drank a whole fifth of vodka," Johnson said.

Mom, is that you?

Kelso tells a few other stories about our man Johnson, but you have to go read him. Go ahead. It's funny stuff.

Or maybe it's just another day, another dude, down in Texas. You gotta love 'em.

(And no, I'm not out of retirement. I just couldn't let this one pass by without comment.)