Walking off the edge of the continent. 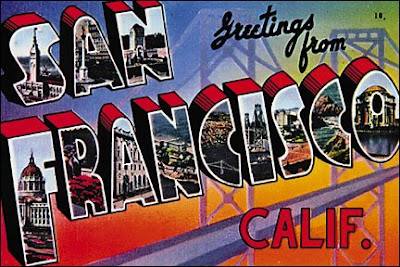 Jenny and I are off to San Francisco. I'll post photos of our adventures.

Posted by David Terrenoire at 10:59 AM No comments:

And on my other right, completely opaque humor.

OK, I'm a liberal, and therefore, a target of the drunk who draws this strip, but I don't get this. I usually read Mallard Fillmore, understand what point he's trying to make and then go on to wonder when and where this cartoonist suffered his head wound, but this time I am completely flummoxed.

I take a back seat to no one when it comes to making sport of regional idioms, but the comedy here alludes me. Is it a liberal thing to go out for a coffee? If I drink coffee, as I do, does that mean I support health care run by insurance lampreys?

Really, this strip makes no sense. It's rarely, if ever, funny, but I can usually suss out whatever simplistic right wing talking point it's trying to make. This one, however, seems particularly obscure.

Does the use of an article mark one a Marxist? Does the omission make one slap a magnetic ribbon on the SUV and vote for the guy who pushes Creationism in schools?

Help me, friends. What the hell does this thing mean?
Posted by David Terrenoire at 8:25 PM 4 comments: 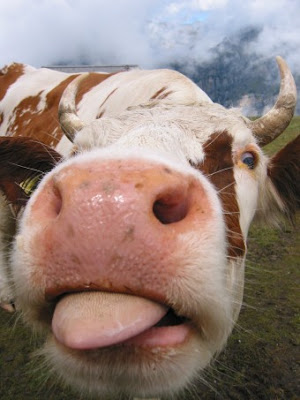 I know I should just let these things go, but I've noticed that my tolerance for bullshit has hit an all-time low. Maybe it's the political season, maybe it's the war, or maybe it's just the fallout of 30 years of daily cow flop from assholes like Rush Limbaugh, a man who assumes everyone is as stupid as his listeners.

Recently, a man who should know better passed along one of the most virulent and obviously bone-headed canards of the war. He said that last year, more people were murdered in Detroit than soldiers killed in Iraq.

This gross and pointless apologia for the war has been around in different forms for quite a while. But they all have one thing in common - they assume you're an idiot.

It doesn't take more than a few minutes with Google to learn that last year, 418 people were murdered in Detroit and 899 soldiers were killed in Iraq.

That's right. But just being wrong isn't what gets under my skin. I'm wrong about a lot of things, just ask my wife. No, what chaps my hide, is the utter bullshit behind such a claim.

Even if the numbers were the same, we're talking about a difference between 150,000 soldiers vs 900,000 citizens. And no, we can't count Iraqi civilian deaths, and we can't talk about serious American casualties, which are in the tens of thousands. No, because then this completely bullshit comparison would be so odorous that not even Rush's listeners would be suckers enough to buy it.

Bullshit. It's what's for dinner.

And I'm not having any of it.
Posted by David Terrenoire at 9:40 AM 6 comments:

I don't know about you, but I need a cookie. 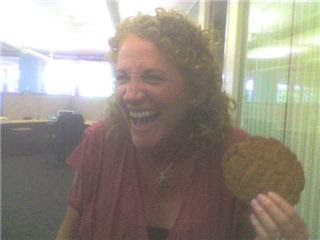 This is Sue with a cookie the size of a manhole cover. This makes me happy.

Posted by David Terrenoire at 10:32 AM 4 comments:

A few weeks ago, I went up to Asheville. This used to be a colorful little college town, with happy stoners, crunchy new age mountain types, a little old money lured by the Grove Park Inn and tourists visiting the Biltmore or peeping the leaves.

This is where Zelda Fitzgerald burned to death in the Highland Mental Hospital and the city Thomas Wolfe called home, as in that place you can't go. 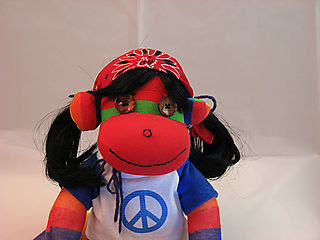 But in the past few years, Asheville has seen rising real estate prices, an influx of Republican-style money and the iffy influence of trustfundsters trolling for a little coed affection. 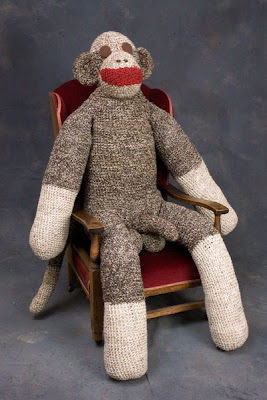 So how, you might ask, does hot monkey love, other than a cheap ploy to boost my Google hits, come into this? It's about the sock monkies, my friend.

One of the art galleries in Asheville had several on display among the more traditional forms of sculptures and watercolors and none of the monkies were quite as, uh, artistic as some of the examples you see here.

I don't mean to be a snob about this, but sock monkies are not art. Not in their natural state, they're not. If they were, my grandmother was a damn sock monkey Picasso. 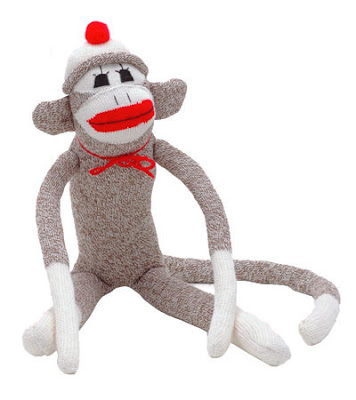 No. We should not go down this road. Ou culture demands that we take a stand. Thomas Kincade is illuminated crap, Garrison Keillor can't sing and sock monkies are not art.

One must have standards.
Posted by David Terrenoire at 10:54 AM 10 comments: 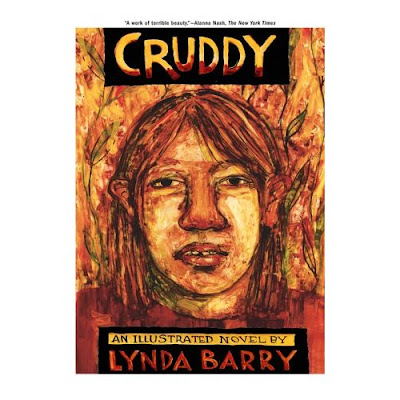 Patti Abbott has asked a bunch of relatively irresponsible writers, myself included, to talk about a forgotten book, one you might have overlooked.

For me, that book is Cruddy, by the cartoonist Lynda Barry.

The story is Roberta Rohbeson's, a 16-year-old who writes a letter to Jesus and tells him to "Have a good summer and stay Crazy." The story takes place a few years after a motel massacre where Roberta has been found, covered in blood, wandering the desert.

This is a dark place Barry takes us to and based on this book alone, I would have Barry's children. Pick it up.
Posted by David Terrenoire at 8:50 AM 3 comments:

Hillary gets the cracker vote! 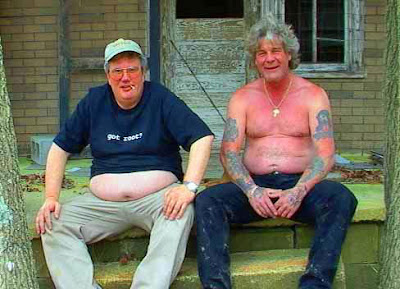 According to the exit polls, West Virginia's voters revealed that they are the most racist in the country. Fully 20% of the white voters reported that race was a factor, and they voted for Clinton 84-10 over Obama.

Yes, that's where I went to school. I'm so proud.
Posted by David Terrenoire at 10:41 AM 6 comments:

I think I'm on record saying that Americans haven't been asked to sacrifice anything for this war, but I now stand corrected. No less a man than our Commander in Chief has made a great sacrifice for the cause.

He's given up golf.

"I don't want some mom whose son may have recently died to see the commander in chief playing golf," Bush said.

And this morning, CNN spent a good eight minutes covering this important story.
Posted by David Terrenoire at 9:06 AM No comments:

Senator Clinton and her supporters.

Sunday, Frank Rich wrote a column called, Party Like it's 2008, that unequivocally says the Clinton race is toast.

Au contraire, the Clintonistas say. Rich, unlike the cowards Kristol and Brooks, allows comments on his column and here's one from Dan in Virginia Beach.

"Rich overlooked the growing resentment by "uneducated whites", or "low income whites",(read crackers), or people in general, at the lemming like hubris, viciousness and racist attacks by the Obama fanatics on Senator clinton and her supporters. Granted it isn't easy promoting a person with no resume, questionable ethics, shady unpatriotic associates, and a wife with an uncontrollable mouth."

I understand Hillary's supporters are angry. Just last year she was considered inevitable, just waiting for her coronation as our country's first female president. This was history, and many women thought it was about damn time.

Then this golden speaker from Illinois rose up and put the electoral kibosh to Hillary's ascension. Women (mostly) are angry. They feel cheated of their historic moment by an upstart, an inexperienced newcomer who hasn't waited his turn, who elbowed his way to the front of the line and is coasting to the nomination on little more than his charm and a shoeshine.

So we get this from observer, somewhere in the u.s., complete with ee cummings' disdain for capital letters:

"frank rich is another rush limbaugh any american serious about the country's future should have voted for hillary in the primaries she is smart, intelligent, pragmatic and the best bet for an america that is peaceful, prosperous and the true world leader"

In response, Hillary has tried everything, from her "as far as I know" moment on 60 Minutes, to kvetching long and hard about how unfair the media's been to her. No one, not her or her supporters have considered that maybe it was the way she ran her campaign that turned away voters, that maybe people are tired of the Rovian innuendo and slur she's tossed at Obama.

I don't know. I do think it's time for a woman to be president. Just not this woman. Hey, if Tina Fey were running, I'd vote for her in a skinny minute. But Hillary? Forgive me, but I just don't want another 4 to 8 years of the Clinton soap opera.

And we've already had 8 years of a president who felt entitled to the office. I want a change.

Now we have Hillary and her supporters warning Democrats that she should get the nomination because there are so many bigots who will never vote for a black man. Now, there's a forward-thinking, progressive argument for her vote.

I went to school in West Virginia and if any of my old friends are reading this today, I urge you to vote for Obama. Let's put an end to this, OK?

Sitting in with the band. 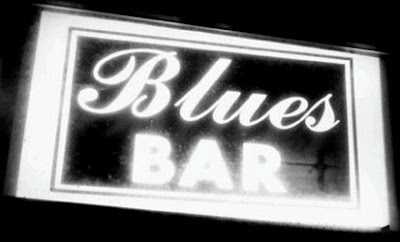 Twelve Cents Shy isn't playing this weekend, but that doesn't mean your humble narrator will be staying home Saturday night.

Nope. I've been invited to sit in with The Monarchs, one of my fave bands. It should be a great night. If you're in the vicinity of Mebane, check out The Stumblin' Pig (no, that's not an ex-girlfriend) and as always, I'll buy you a beer.

Posted by David Terrenoire at 11:49 AM 2 comments:

When you're running with the ball... 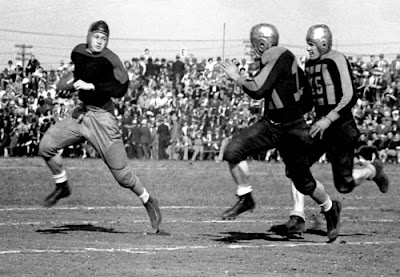 ...and the opposing team is cheering, perhaps you're running the wrong way.

As Hillary garners more enthusiastic support from people like Richard Mellon Scaife, the bat-shit crazy right wing kajillionaire from Pittsburgh, she might give some thought as to why.

Rush, Fox News and Bill O'Reilly are doing what they can to spark Hillary's campaign against Obama and, forgive me for being suspicious, but I don't think they're doing it out of any love of country. And given their behavior during the 90's, they're certainly not doing it out of any new-found love of the Clintons.
Posted by David Terrenoire at 9:05 AM 1 comment: 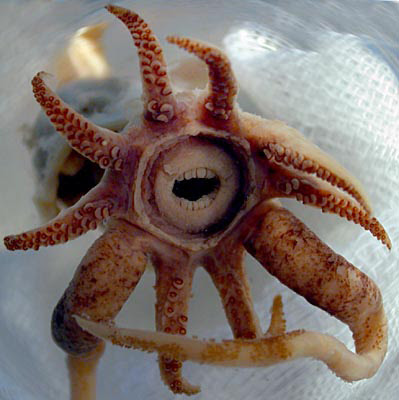 Never search Google images for "dentist" or "teeth" before your next appointment.

Yesterday I bit into what I assumed was a safe lunch (Jamaican jerk tilapia) and broke a molar. So tomorrow at 8:00, I have an emergency appointment for extreme pain. Joy.

Other than that, the weekend was great. The gig went well, I slept all day Saturday and on Sunday, Molly and I canvassed a city precinct for Obama. Molly is 27 and this is the first time she's ever expressed any interest in politics. I'm not sure I'm being a responsible father by encouraging her. God knows politics has not been a healthy avocation of mine.

But tomorrow is primary day here in North Carolina. If you live here or in Indiana, please vote.

You know who to vote for. He's the guy who's not feeding you a big bowl of bullshit.
Posted by David Terrenoire at 4:23 PM 3 comments:

The beaver and the bottle of vodka. 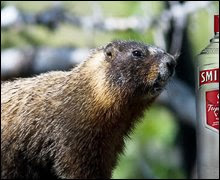 What? It's in the news!
Posted by David Terrenoire at 10:20 AM No comments:

That's right, Twelve Cents Shy is playing at a place called Crawdaddy's in Carrboro tonight at 10:00.

Tim Collins, our guitar player, is out of town so Chris Berry, six-string virtuoso of the Piedmont Sheiks is stepping in. Jeff Learman, our keyboard player and apprentice diva, is also out of town, which is OK since I've heard Crawdaddy's is so small that Jeff would have to put his amp in the parking lot. We'll see.

A new lineup always shakes things loose, a good thing for the blues if you ask me. It should be fun. If you're in town, come on out and I'll buy you a beer.
Posted by David Terrenoire at 9:10 AM No comments: