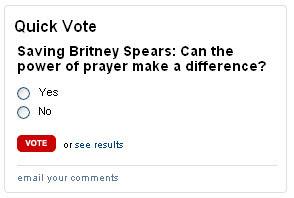 This Modern World asks the question, "Is CNN still a news organization?"

That's yesterday's CNN poll up there, asking the question that all Americans want to know: Can prayer save Britney from flashing her cooter at the cameras again?

I sure want to know.

I'm always amused when I hear wingers complain about "the liberal media." The lame-ass media, yes. The irrelevant media, no question. But liberal? Like Exxon is liberal.

For instance, last night I heard a business report about a spa in LA that caters strictly to children. As one indulgent mom put it, the little tykes get a manicure and a pedicure, and then "they feel good about themselves."

How quaint that sounds now, like Grandma putting up preserves for the winter.

And, according to the report, market research shows that the luxury spa treatment is particularly attractive to tweens. Now there's a shocker. Who could have guessed that a preteen girl would want to drop a few hundred bucks of Dad's money so she can be treated like a princess by underpaid, undocumented workers.

That, my friend, is news. And who can we thank for this hard-hitting piece of investigative journalism?

All I can add is, Good night and good luck.

Tomorrow: The holiday card is back! Just in time for the holiday! Watch for it!
Posted by David Terrenoire at 8:26 AM