They're trying to make my head explode. 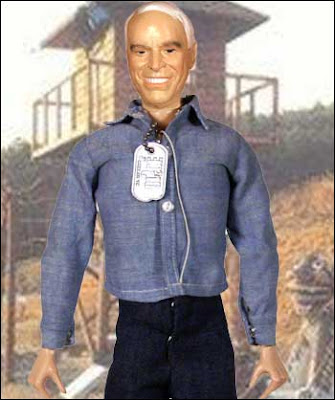 By now you've heard about the affair McCain had with Vicki Iseman, a lobbyist for the telecommunications industry.

It appears that McCain, the only candidate who has been made into a really ugly action figure, says he did not have sexual relations with that woman. He just had the normal lobbyist/senator relationship where no one gets screwed but us.

But that didn't stop the NY Times from running the story on the front page, with the implication that Big John and Miss Vicki were doing the naked lambada in the back of the Straight Talk Express. Immediately, Fox News dropped their outrage over Michelle Obama's lack of sufficient pride in America and drummed up their umbrage over this vicious assault on McCain.

I wish they had been this apoplectic over the trashing of another war hero, John Kerry, but there's only so much umbrage to go around over at Fox and it just wasn't Kerry's turn.

Jesus, how bad is this going to get?

For those who are as tired as I am of the news, here's a tip. I've been downloading podcasts of old radio shows and then playing them in my car during my commute. Last night I listened to Burns and Allen and Gracie is as funny as I remembered.

This morning I listened to The Last Wish, an episode from The Adventures of Philip Marlowe. While I couldn't shake the echoes of Nick Danger, Third Eye, out my head, it was better than what NPR was peddling. And from the looks of that list, I'll be able to make it all the way to November without being exposed to any more faux exposes.

Jesus, I hate politics.
Posted by David Terrenoire at 8:46 AM

I say again, is it November yet? And by that I mean, any time in November after election day.

Agreed, I listen to OTR every morning and evening on my commute. You may want to check out www.OTRCAT.com which has a new episode every day to download (which I've become fond of listening to every morning).