Is anyone driving the GOP bus? 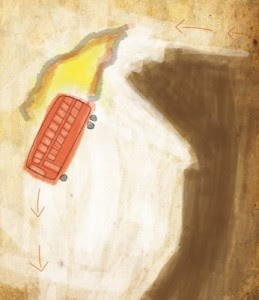 There's a lot to go through here, and I don't have much time, so let's get to it.

The latest intellectual assault on the Obama administration is the notion that he wasn't born here. Yes, I know it's not news, and I know this story was killed during the campaign, but like a zombie, it is shambling across the news cycles, eating Lou Dobbs' brain and being a smelly nuisance.

The latest GOPer to take the Birther line is none other than Liz "Dick" Cheney, famous for being born rich, connected and without any scruples whatsoever. Like Paris Hilton, though more despicable.

Liz is willing to say anything, no matter how big a lie, and say it loudly, interrupting anyone who has the sad misfortune to actually be in the same room with her, because I'm sure her spit is corrosive to flesh and steel.

Here she is giving the Birther movement a little under-the-table wank. She's all class, our Liz.

Now, a sane person would have to wonder just where the GOP is going with this. Because anyone who hasn't had their brain eaten with fava beans and a fine chianti knows that the people who are worked up over Obama's birth certificate are, how should I put this?

In other words, the GOP base.

And the fact that news people actually invite Liz Cheney on TV, knowing that her real accomplishments are limited to dropping out of the right birth canal, leads us to our next story, which is a survey by Time Magazine that identifies The most trusted news anchor in America.

(Gary Myers over at Red Tree Times posted this and he kindly let me have a swing with his bat. Thanks, Gary.)

Now that Walter Cronkite has left us, who, Time wondered, is America's most trusted news anchor. The answer? With 44% of the vote, that man is Jon Stewart of The Daily Show.

Brian Williams was next with 29%, followed by Charlie Gibson at 19% and Katie Couric at 7%. Not surprisingly, Katie, after those ambush, what-do-you-read questions that dogged former Governor Palin got nada in Alaska. Zip. The Big Bupkis. The Eskimo Cold Shoulder.

Now, if this was a country where the sane actually ran things, you would wonder how a comedian fronting a fake news show earned this kind of coast-to-coast credibility? To answer that, and to bring this thing full circle, this is how Jon Stewart handled the Birther story.

Posted by David Terrenoire at 2:49 PM

Let me assist Anonymous Whiner by saying, "You like to think about guys sucking on things, don't you Terrenoire?"

I much prefer to think of Liz giving Lou Dobbs an under-the-table tug.

Poverty could be eliminated. The economy could be structured so that no American business suffers a loss or at least has the capital to weather a downturn. Health care could be free to all, and immigrants would sign the guest book on the way into America.

I outline this utopian vision to point out that even if it came to pass, and America enjoyed this golden age, Lou Dobbs would still find an excuse to do his indignant outrage schtick every night at seven.

I never watch Lou Dobbs. I get most news from the paper or online newspapers and do not catch the tv news. I did see one piece he did on a WI guy who, it seems, was railroaded by the ATF for a malfunctioning rifle. I give him credit for covering that story.

I saw that story, too, but not on Dobbs' show. The guy most definitely got railroaded.