There's always that one guy. 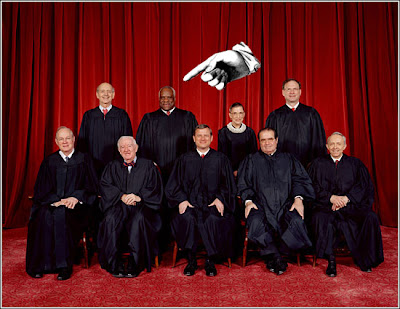 If you assemble nine random people in a room, the chances are you're going to get at least one jackass. On the Supreme Court, that jackass is Clarence Thomas.

Last week SCOTUS laid a smack down on school officials who conducted a strip search of a 13-year-old girl, Savana Redding. What was Savana's alleged crime? Somebody dropped a dime on her for smuggling (shudder) ibuprofen.

That's right, ibuprofen, the scourge of public schools across the nation.

School officials made the girl take off her clothes and expose her breasts and hoo-hah to two school brownshirts. None of the dreaded drug was found.

This was hardly a sweeping, liberal decision that gives students 4th Amendment protections. This was not even the usual 5-4 decision we've seen so many times lately. Even Justice Scalia voted with the majority and he hates everybody.

But the one guy? The one Justice who thought that strip searching a young girl suspected of smuggling Advil was OK? That jackass was Justice Clarence Thomas.

“Preservation of order, discipline and safety in public schools is simply not the domain of the Constitution,” he wrote. “Redding would not have been the first person to conceal pills in her undergarments. Nor will she be the last after today’s decision, which announced the safest places to secrete contraband in school.”

So every time Clarence Thomas sees a 13-year-old girl walking down the street, he's going to wonder what's in her pants.

Jackass. Makes you wonder who beat this guy as a kid.
Posted by David Terrenoire at 7:28 AM

Thomas' shining moment in the dissent was this:

In other words, the fact that no evidence was discovered was not indicative that the little girl was innocent, but rather was all the more reason to expand the scope of the warrantless search to the little girl’s underwear.

I suppose if they hadn't found evidence there, a cavity search would have been "eminently reasonable," followed by waterboarding. Because school officials, like all of those in authority, are never, ever wrong in Thomas' world.

Jackass. Makes you wonder who beat this guy as a kid.

And makes you wish they'd beat him a little harder.

I thought Scalia was the nuttiest of the nuts. I was wrong. How in the world could Clarence Thomas be considered of sound mind after a decision like that?