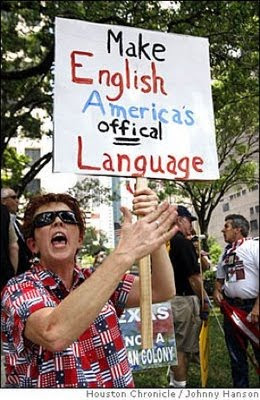 So, the Democrats got their asses handed to them on Tuesday. I'm not happy about that, but I can't say I'm surprised.

At the risk of becoming that old man who claims that everything was better in the old days, because it wasn't, there is something significant that we've lost.

We used to have the courage to see beyond today. We used to believe that watching your neighbor suffer in hard times was like saying to him, "Your end of the boat is sinking."

We rebuilt our former enemies with the Marshall Plan, one of the most humane, smart, and foresighted government expenditures of tax money in this nation's history.

We educated an entire generation of men through the GI Bill, a spending of taxpayer money that came back to us seven-fold.

We financed the moon landings, Interstate highways and the Internet, all things that made us richer, smarter and more advanced than any nation in history.

We saw our grandparents in poverty and made Social Security a way for them to retire with some independence and dignity.

Today, our political zeitgeist is all about balancing the budget by cutting taxes and cutting spending. It resonates because it's simple and easy to put on a bumper sticker. But we know from experience that it doesn't work. Why? Because the problem is too complex to be solved by bumper sticker ideology.

The country I grew up in was one where every able-bodied male had an obligation to serve because, in my father's words, "that's the price you pay for living in a free country."

We used to be a place where people grudgingly paid taxes, in Ike's time up to 91%, because we all knew that better schools, a healthy workforce, and a sound infrastructure were the foundation of a strong economy.

When I was a kid, we heard people say, "no kid should go hungry in the richest nation on earth." We knew, without saying it, that one day those hungry kids would grow up to be angry adults. And besides, they were kids. It was the right thing to do.

We have, in the past 30 years, become a pinched and stingy society where people are scared that somewhere, someone is getting something for nothing. Higher education in California used to be free and the system was the envy of the world. Now, students graduate owing tens of thousands of dollars to bankers.

This is Republican progress, encouraged by people like the Tea Party movement, a political party that is part astroturf, funded by invisible billionaires like the Koch brothers and part willfully ignorant people who don't see that their Social Security checks and Medicare payments are the only things keeping them from a diet of ramen and dog food.

Seriously, I don't recognize my country any more. It's not the great nation it once was. I don't know whether I'm angry about this or just sad that our political engine has been hijacked by corporatist oligarchs who have duped enough people to keep them in power. Maybe it's both.

But I'm trying to let politics go. I'm trying to listen to more music, spend more time with my wife and friends, and most of all, turn off that fucking TV.

The tea partiers wanted to take their country back. Great. Here it is, ladies and gentlemen. Let's see what you do with the responsibility of governance.

But first, you might want to work harder on your spelling.
Posted by David Terrenoire at 9:50 AM

Nice to see you blog again, even if it is about our ride on the swirls of the big bowl. As I read somewhere yesterday, the great irony of the Conservative movement is that these self-righteous douchenozzles are running for government positions on the platform of wanting less government, who believe that less government is the best government, yet don't mind cashing a paycheck to do exactly what they're railing against. I understand it's more complex, but I think that's what it boils down to.

I hear Sweden's nice this time of year...

The political winds are fickle. I don't think that this last election means much at all. More important was the Supreme Court decision to allow unlimited spending by political parties on ads, which here in Kentucky has meant non-stop Ayn Rand Paul soundbites, the constant drumming of slogans. The dogs howl at night and will not be comforted.

All a man can do is try to seek a separate peace with the world. Relax and read some good novels, where some shared sense of justice might be discovered, our common humanity, and its better angels, yet affirmed.

Great to see you blog again-- you've been missed.

I grew up with 'America, Love it or Leave it'. In the end, I did both. Watching the fall of an empire and the haphazard dismantling of a noble civilization is painful, but at least I'm doing it from warm and lovely New Zealand.

Glad to see you back in full voice, my freind. And I agree...trying to spend more time away from the TV, the nut-blogs, and especially the cesspool of wingnuttery that is the comments section of my local paper.

That is very kind of you to write this share for us, thanks a lot

That article is so interesting and makes a very nice image in my mind. Thank you for sharing this info with us!

I did’t know that.

Many thanks for such a write-up. I undoubtedly cherished reading it and talk about this it to my friends.