They should have hired a Mexican to take the test. 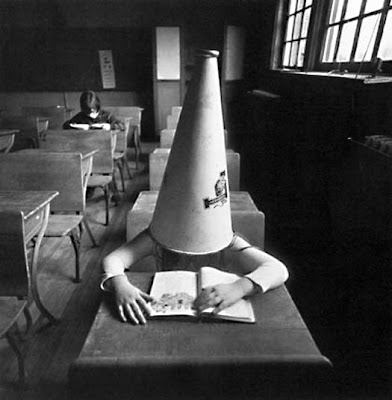 Well, this certainly explains a lot about last week's election.

A conservative group in Oklahoma, and that means that they don't wear brown shirts to work, but would if they could, thought they would celebrate the Constitution by asking a bunch of Oklahoma high school students to answer questions that every immigrant has to answer to become a US citizen.

And how did the little Sooners do? Only 2.8% passed. Yeah. As the kids say, epic fail. Turns out that OK students aren't so OK after all.

But the questions must have been tough, right? I'll let you decide. Can you answer these ten questions?

1. What is the supreme law of the land?
2. What do we call the first 10 amendments to the Constitution?
3. What are the two parts of the U.S. Congress?
4. How many justices are on the Supreme Court?
5. Who wrote the Declaration of Independence?
6. What ocean is on the East Coast of the United States?
7. What are the two major political parties in the U.S.?
8. We elect a U.S. senator for how many years?
9. Who was the first president of the United States?
10. Who is in charge of the executive branch?

"It's depressing," said Brandon Dutcher, vice president of the group who funded this little lesson in despair. "If these survey results are any indication, we are very much a nation at risk."

These were high school students. High school. And only 23% could name Washington as the first president. Jesus Christ, kids, he's on the fucking dollar bill.

The only question that a majority of these kids could answer was number 6. Yes, a whopping 61% of them could identify that giant body of water to the east.

And we wonder why tea baggers can't spell.
Posted by David Terrenoire at 1:01 PM

Aren't students required to take American Government or Civics any longer? But as someone who works in a political science department, I am not surprised. In PS 101 when we were asked what two countries bordered the US, one-third of the class named Russia. Some said Alaska. Many thought Canada was part of the US. (And I bet they think that sometimes too).
And we are ten minutes from Canada. Oddly, they all got Mexico.

Patti, I bet most of those who got Mexico thought that country included New Mexico.

This Post gives me lot of information Great to read

Many thanks for such a write-up. I undoubtedly cherished reading it and talk about this it to my friends.

great) liked everything very much) keep it up and dont stop)