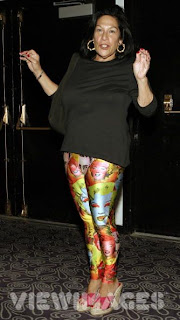 That woman up there in the Warhol pants is Linda Stein. Ms. Stein was murdered last week.

The pants were not the motive.

Ms. Stein was the former manager of the Ramones, and a pioneer in the punk revolution before she turned real estate agent to stars like Billy Joel and Madonna. No, that wasn't the motive, either.

Today's New York Times reports that Ms. Stein was bludgeoned by her personal assistant because Ms. Stein “just kept yelling at her,” according to a law enforcement official.

I'm betting that personal assistants everywhere will be excused from this jury.

Elton John is going to play a memorial concert. What a surprise. I get the feeling that a dog could be struck down by a speeding cab and Elton John would be there, standing over the gutter singing Candle in the Wind before the body cooled.

Happy Friday. Let's hope this weekend is better than the last.

And whatever you do, don't piss off your personal assistant.

Next Week! The Return of The Lazarus Amp and my comatose film career flickers its eyelids prompting Dr. Bill Frist to proclaim It's Alive! It's Alive!
Posted by David Terrenoire at 2:16 PM

To err a smidge on the side of PCness, let's just say the news of Ms. Stein's demise by immoral means, for me at least, brought up mixed feelings. You hate to see law and order breeched, but...

I shared your misgivings, Dread, but after this week my filters just gave out.