I'm sticking to the union. 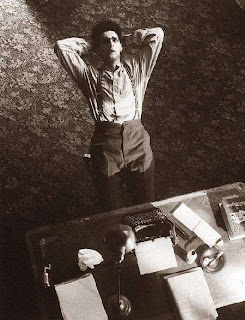 There's been a lot of writing about the writers' strike, which seems to be a bit of an oxymoron (or is it a paradox?) but no matter. The writers of the WGA, having been burnt in the past because they didn't negotiate with an eye to new media, want a piece of whatever new venues might trundle down the road in the near future. Their thinking is simply this: If in ten years somebody is making a buck by screening the fruit of their labors onto the back of your retinas, the writers want their cut. It's only fair. 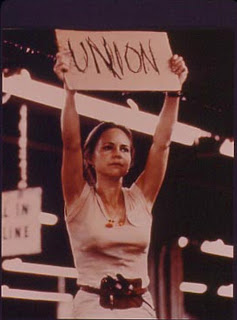 This has given me a new excuse for not working on my novel. See, it's not that I'm lazy or uninspired, I'm supporting the union. We don't cross picket lines in my family, even imaginary ones like the line stretched before my keyboard. 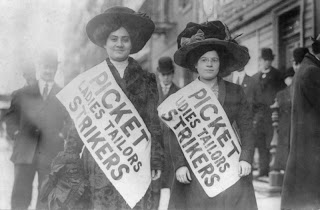 My father was management. He liked nothing better than busting the union in one of his stores. Although he never said so, I think he hated unions because he saw organization as a personal insult.

My father was one of the most decent and honorable men I've ever known. He taught us that our word was everything and all men deserved to be treated fairly. So if a union tried to organize his store, that meant his employees were saying they couldn't trust him and I don't think he could work with people who didn't trust him. 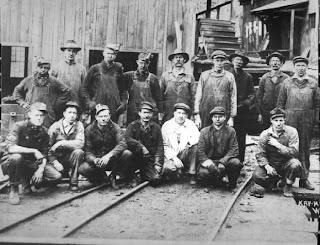 I became a union man through the United Mine Workers. They're probably a little different than the writers walking the picket line in LA.

But the mine workers organized over their fair share of the pie. Until the UMW got some muscle, coal companies held miners in virtual bondage, paying them in company scrip that was worthless anywhere other than the company store and the company made sure that no matter how hard you worked, you always fell a little behind every month. Remember the Line from "Sixteen Tons?"

"St. Peter don't you call me 'cause I can't go.
I owe my soul to the company store." 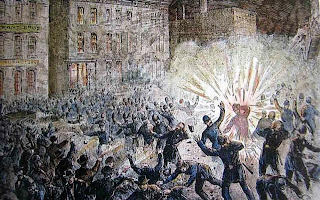 I heard Studs Turkel yesterday. The old bastard is 95 years old and still kicking capitalist ass. He told a story about a well-dressed man and woman who sneered that they hated unions and Studs asked the guy if he worked a 40-hour week. The guy said he did. Studs told him he could thank the three men who were hanged after the Haymarket Strike. Work five days instead of six? Thank the strikers who were shot in the 20's.

I'd use that line more often except I don't know anyone who works a 40-hour week. But then, I don't know anyone who is in a union, other than screen writers. And I think more of us should organize. God knows I could have used a little leverage when I negotiated my last raise. That is, if you could call Oliver Twist asking for more gruel a negotiation.

So, if you have a paid vacation, sick days and weekends at home, hug a union man or woman today. We've owed them so much for so long we've forgotten just how much of the American Dream was paid for with strikers' blood.

Dusty Rhoades has a video you should see at his place today and Paul Levine wrote about this over at Naked Authors. Take a look and then join me in that old Woodie Guthrie song,

Now go rent Matewan.
Posted by David Terrenoire at 8:54 AM

I have no opinion on the matter - don't know enough, and no dog in the hunt. I did find this write up interesting, though:

David,
My grandfather was a union organizer in southwest Louisiana during the Depression. He was sneered at, shot at, had dogs sicced on him. My dad was proud union member from the time he got out of the navy following WWII until the day he died. I can remember many a strike when there was no income and my dad left every morning to walk a picket line. Studs is absolutely right. Those folks working a 40 hour week, enjoying health insurance, and the ability to own a home and put their children through college can than a union member.

If all this strike does is get more people to rent Matewan, it might almost be worth it.

Twice when I was a kid my Dad was on strike over Christmas.

I think it's sad how labour history has been all but wiped out and that in so many ways we're returning to a pre-union world. Like you say, not many people work only a 40 hour week these days.

Now, get back to work on that novel!