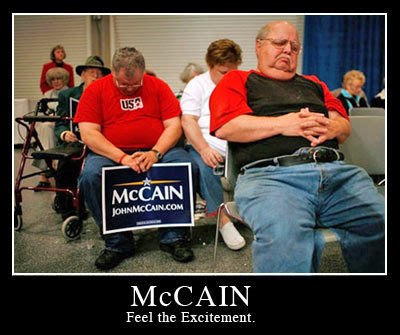 I took a trip north this weekend. Jenny and I drove up to meet a lovely German lady in an Obama button and to provide cheap manual labor for my nephew's latest home-improvement project - building the Taj Mahal in his backyard.

And we don't even speak Mexican. We thought trabajo was a car.

While driving through the real Virgina, we saw McCain stickers stuck to big SUVs that got, in my estimation, about 12 MPS (Miles per Soldier). Smaller cars, driven with bigger dreams, sported Obama stickers and as we headed into the DC area, the land Joe McCain called Communist Virginia, we started seeing more Obama signs and stickers, proving nothing really, except that Joe McCain is a jerk.

Joe is John's brother, and you've probably heard that he called 911 last week to complain because he's cranky and he's old, although not as old as John. When the 911 operator asked if he was really calling the emergency line to bitch about sitting in traffic for 15 minutes, intimating that anyone who would do that is a flaming asshole, Joe McCain said "fuck you" and hung up.

Proving, once again, that 911 operators are shrewd judges of character.

Speaking of assholes, there's this story out of Michigan. (In fairness, Dusty Rhoades also picked this up over at his place.)

A woman named Shirley Nagel vied with Joe McCain for biggest asshole of the week. On Halloween, she refused to give candy to kids of Obama supporters. Here's from the Free Press:

As FOX2 News reported, Nagel planted a sign in her yard that read, "No handouts for Obama supporters, liars, tricksters or kids of supporters". Nagel, according to media reports, brought tears to the eyes of some of the young trick-or –treaters that she turned away. 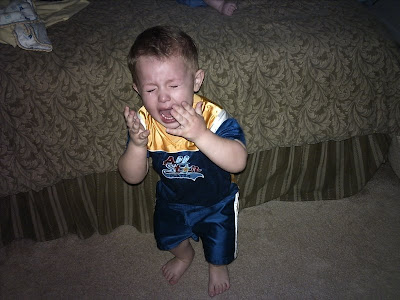 Isn’t American politics great? Not only are the people you disagree with to be vilified; now their children are to be shunned? Forget the notion that reasonable people can disagree, politics is "war" and if a few children get caught in the crosshairs, well, what’s "war" without a little “collateral damage”?

Now that we've discovered a thread for this post, let's take a look at another Joe in the news. This is John McCain's new role model, Joe (not his real name) the Plumber (not his real profession).

As impossible as it is imagine, Joe the Plumber is an even bigger attention whore than Sarah Palin, soaking in his 15 minutes like a pig in manure.

Joe has become such a big celebrity in a campaign that once shunned the word that John McCain brings him up in almost every speech, introducing him even when Joe isn't there.

Supporters wave plungers in his honor, and considering the volume of feculence associated with Joe's rise to fame, those plungers are probably more appropriate than they intended.

What brought Joe to America's attention? One day, seeing a TV camera, Joe button-holed Obama and laid out the scenario that he was going to buy his boss's business (he wasn't) that would earn more than 250 grand (it wouldn't) and demanded to know how Obama's plan would affect his taxes (that he doesn't pay).

Obama calmly laid it out, assuming Joe was honest (he isn't), intelligent (he's not) and really wanted to know (he didn't). During the explanation, Obama used the unfortunate phrase "spread the wealth around," which McCain, being completely devoid of ideas, jumped on like a chihuahua on a goose dropping.

Joe the Plumber is just the latest Joe being pimped by the campaign, starting with Sarah's Joe Sixpack and, as it turns out, this Joe is just as genuine as the other Joe. Except this Joe has hired a publicist and is pursuing a country music career or maybe a shot at the Senate. What the hell, if that bundle of raw energy Fred Thompson can juggle two careers, surely Joe can handle both, too.

To bring this all back around to the beginning of this post, as we were working on my nephew's latest addition to his estate, I looked over at a neighbor's yard, where there was a NOBAMA sign and said, "I wonder if people like that know they're assholes."

My nephew said, "They should. Enough people tell them."

So here's to Joe McCain, Joe the Plumber and Shirley Nagel of Michigan. Three people who have worked diligently to make this year's Republican campaign smell a lot like ass.

It takes a lot to stand out in an election cycle, but these three have shown the grit and imagination to be True Assholes in a very crowded field.

Posted by David Terrenoire at 10:51 AM

I wonder if she's the one who stole my sign. She lives five minutes from my house.