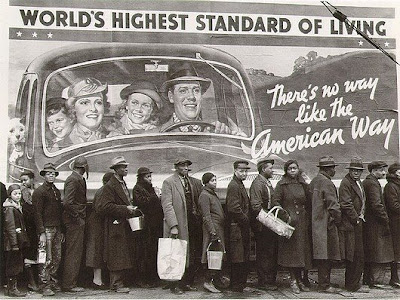 Here's something.
If you're paying attention, you know that the blessings of the Bush economy have fallen hard upon the heads of too many good and talented people, giving them spare time to contemplate the poaching and roasting of Wall Street bankers, Republicans who believe the free market will regulate itself, and anyone who bought a $400,000 house on a McDonald's salary.
I thought about this listening to George Bush's last (YAY!) press conference. His "exit interview" he called it.
One item, out of a whole list of Bush delusions, jumped out at me. That was his insistence that America's moral standing hasn't been harmed by Iraq, Guantanamo, Abu Ghraib, water boarding, the suspension of habeas corpus, the trashing of the Geneva Accords, the Constitution and the DOJ.
He bristled at the mere question. "I strongly disagree with the assessment that our moral standing has been damaged," he said. He conceded that maybe America's image had been tarnished among elites in Europe. People he had met in Africa, India and China did not share that judgment, he said.
Right. This is the guy who is so delicate that Americans who disagreed with him had to be removed from wherever his royal eye might light and corraled into distant "free speech" zones. I'm sure he gets up close and personal with everyday people in Africa, India and China. People who think he's just swell. It's just Americans and those snooty European elites who find fault.
There have been disappointments, he admits, but not because of any failing on his part. No, sir. The economy, 9/11, the war, the criminal cronyism, the deficit, the looting of the treasury, abuse of our military, the obsessive secrecy, the lies, the stonewalling, the astounding ability to make politics stink like a roadkill skunk, all that was someone else's fault.
Elites, probably.
He insists he's done a heckuva job.

Take his response to Katrina. He wasn't slow to act. He just didn't want to land in Louisiana and get in the way. So he went to John McCain's birthday party instead.
"Don't tell me the federal response was slow," he huffed, "when there was 30,000 people pulled off roofs right after the storm passed."
Aside from his typical assault on the language, Bush conveniently sloughs off blame and grandly takes credit for what had been the heroic and independent action of the Coast Guard, not FEMA.
But it was the use of the word "elite" that really got under my skin.
And also, Sarah Palin there, proving my contention that she's George Bush in a dress, and also uses that word there a lot also. Elites.
You know, people who don't believe dinosaur bones were strewn about by Satan to test our faith.
And like George, nothing that went wrong in the campaign was Sarah's fault. It was John McCain's people. It was the media. It was that awful Katie Couric who asked gotcha questions like "what do you read?"
It was the elites who have a "class issue," because we would never vote for someone who came from nothing, worked hard and rose to the top on his or her own merit.
Oh, wait, I think we just did.
To all those elites who face finding a new position in the aftermath of the Bush years, I wish you the best. And if that Australia thing doesn't work out, I hope you find something else even more rewarding.
Posted by David Terrenoire at 9:43 AM

But you also failed to mention that President Bush made one very valid point: people cried out why we did not connect the dots before 9-11; and after, when polices were put in place to catch terrorists, people now cry out why are we connecting the dots.

I am sure that asking nicely, taking good care of Gitmo prisoners with game boys and three hot meals daily would surely break even the most hardened jihadist, but I personally think that people like the ACLU, ACORN and other so-called rights protectors should be made to care for them when Gitmo closes.

I do not agree with a lot of the things that happened during Bush's administration, particularly the out of control spending- but blame everyone in congress for it, not just the president.

I hope you are as fair in your assessment of Obama, who is starting off putting us five times as deep in the hole as Bush ever did, and he isn't even in office yet.

Oh yeah.. the first four years will be a reflection of what Obama was left with, not what he is doing to make it worse.. my fault. I apologize for my dissension...

Connecting the dots and breaking the law are two very different things, EagleEye. That we wanted the administration to do something didn't, for a lot of us, mean abandoning those principles that make us a free nation.

Somehow that distinction is lost on Bush and his apologists.

I agree. If laws were broken, and it is proven in a court, so be it. But so far, the only one I still hear mentioned is wire tapping phone calls.

But I don't see that going anywhere. It won't be pursued by BHO, I don't think, though with Pelosi and Reid running congress it may change.

And to the distinctions being lost, they aren't. But what is lost on many is that I could care less about the rights of some jihadist about to strike innocent people. They have no rights.

But that is a personal opinion. :)

Waterboarding is against the law, too, along with warrantless wiretaps. But no one will be held accountable.

As for the assumption of guilt, that goes against the very principles of our legal system. We have no way of knowing whether the men being held in Gitmo are guilty or not. They held two brothers for years all because they told a joke about Clinton and it reached powerful people who had no sense of humor.

Those men were eventually released, but both of them were highly educated and spoke English fluently. Now think about the kid who doesn't speak English, has been wrongfully accused, or maybe there's a mixup of identity and he's being held without trial.

We have laws and treaties to protect the innocent, and those are being violated by our government.

I don't have any sympathy for jihadists either, which is why I'd rather avoid creating more of them.