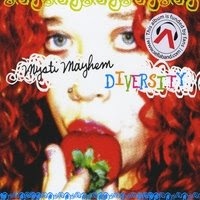 Last Tuesday we went to see Hammell on Trial in Chapel Hill. I thought it was a perfect way to celebrate the inauguration. Before Hammell this 3-piece played the first set fronted by a young woman named Mysti Mayhem, which is a great roller derby name.

This young woman has a terrific voice that can wail or whisper with the same balls-out conviction. She commands the stage. Her guitar paying is confident and it looked like she was having a good time, and even though the crowd was small, we were enthusiastic.

I even bought her CD, Diversity, produced by the legendary Chris Stamey, and put it in my player for the commute.

But I'm not here to do a CD review. I mean, who the hell am I? No, I'm here to talk about influences. The next day my daughter said she could hear a lot of Ani Difranco in Ms. Mayhem's music. I don't know. But I do know that when you're young, you always sound like someone else. Bob Dylan sounded like Woody Guthrie. Bruce Springsteen sounded like Bob Dylan. Hell, Fountains of Wayne still sound like the Beatles.

When I was young, there was a short period when everything I wrote sounded like Richard Bautigan. Then I went through an extended Updike phase. Now I sound like this, which is like nobody else I know.

That's the way it works. Young people get so hung up (at least I did) on being original, that they freeze up just when they should be soaking up all the influences they can. You sound like people you admire for a while, and then you sound like yourself, which sounds like no one else.

Mysti and her band opened for Hammell on Trial, and if you ever get a chance to see him perform, go. Do not hesitate. He's a one man force of nature, beating a 1937 Gibson that looks as tough and put-upon as Hank Williams' bartender.

Support live music. Go see a band this week. You'll be glad you did.
Posted by David Terrenoire at 9:27 AM

I knew a drummer who claimed he didn't listen to anyone because he didn't want any influence beyond himself. I thought he was a dope and a mediocre short-order cook to boot.

Favorite Brautigan?
"He'd sell a rat's asshole
to a blind man
for a wedding ring."

David Terrenoire said...
This comment has been removed by the author.
12:16 PM

That is a great quote.

I knew a writer who refused to read other fiction for the same reason. He's not a very good writer.

And reading this post, I realize that it's not my most sparkling prose. Ms. Mayhem, Mr. Hammell and the topic all deserve better.

Maybe it's the weather.

I ran into something a while back that I wrote when I was in high school.

Good Christ it was horrible. I had no idea just how distraught and emo I was back then. You'd think I'd spent all my time listening to the Smiths, reading Plath and slashing my wrists.

And don't get me started on the poetry.

It's all a bad imitation of somebody else. Makes me cringe.

I look at some of the work I've done lately. I like it. I think it's pretty good, but if I squint I can see that pseudo-goth sonofabitch poking through the lines.

I couldn't have gotten to where I am now without going through that first. I had to try to be somebody else (badly) before I could be myself.

And I'm still not there, yet. Somehow doubt I ever really will be.