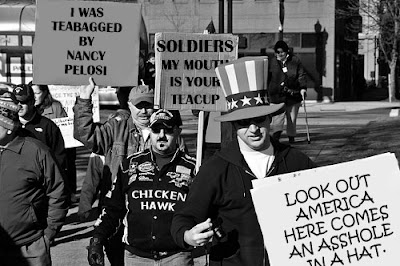 As Jenny works on our taxes, certain that we'll have to pay again this year, right wangers across the nation plan on staging tea parties, hoping that the economically-numb populace will think of the Boston Tea Party and not that other kind of teabagging, which we won't go into here.

We do have standards.

What are the wangers protesting? Taxes. They don't like 'em. Which makes them exactly like every other sentient being on earth.

What separates them from intelligent life is why they're protesting. Obama plans to let the Bush tax cuts expire. This means that if you make over $250K, your tax rate will go from 36% to 39%.

I'm not anywhere close to that bracket, so I'm not breaking a sweat, but it sure would be nice to be faced with such weighty problems.

And I'm guessing those guys in the picture aren't anywhere close to making $250 a year, either, but I could be wrong. Blowing sailors in the bus depot could pay more than I suspect.

And I don't remember these guys squawking when Reagan and Bush ran up record deficits, either. But that was before. They're newly converted deficit hawks now, or at least unitl the next time Grover Norquist, Dick "Dick" Cheney or some other lying bastard tells them that deficits don't matter.

But the one thing the wangers really don't understand is history. The Boston Tea Party wasn't about the tax as much as it was about not having a voice in Parliament. Taxation Without Representation. Remember that? But these guys have a voice in Congress, it's just not as loud as it used to be.

You lost, I know. It sucks. I know that, too. But breaking open bags of Earl Goddamn Grey doesn't make you the moral equivalent of our Founding Fathers. It just makes you a bunch of ignorant, easily manipulated dicks. You're getting tea-bagged all right, but by your party's cynical leaders.

All I can say is, open wide suckers.
Posted by David Terrenoire at 12:40 PM

Republicans (party or supporters) have zilch to complain about regarding taxes or any other economical conundrum since 12 of them held out for $150 in perks/earmarks/blackmail for the first screwing of the taxpayers (including those in the picture you show now looking to have tea parties).

As for the $250K … well, because we work almost around the clock and because we took money from our 401K’s to buy a house (before our 401K’s were completely wiped out by the same scumbags who are getting the bailouts), it jumped us into an absurd tax bracket that has cost us a full third of one of my yearly pay checks. Our bad (to some degree) … and I’m one of the suckers who doesn’t mind paying taxes so long as they have a purpose … (i.e., certain forms of welfare (the truly needy), fine … education (revamped so kids aren’t pushed through), fine … taking care of the elderly (any elderly), fine … the military, fine … etc., but bailing out banks, insurance companies and other financial institutions, GM or any other corporation without guaranteeing: a) jobs will no longer be outsourced and those that were will be returned; b) no layoffs until the loans are paid back; c) bailout execs forget your bonuses and raises … well, you get the picture.

The problem for me regarding tea parties is why the entire country wasn’t up in arms about the issues above BEFORE our wonderful government (both sides of the aisle) GAVE ALL THAT (OUR) MONEY AWAY.

But Republican tea parties after the fact? That’s like Obama’s “No more earmarks” rhetoric after allowing more than 9,000 of them. Just a lot of nonsense … sound and fury ... the same old same old.

From the neo-nazi message board Stormfront.org:

Ladies and gentlemen, I think every WN needs to not only attend the April 15th Tea Party nearest you (I'm going to the Alamo in San Antonio) but then stay involved and help provide leadership to this movement.

I believe that this is the white revolution we've been waiting for.

It doesn't look what we expected but this is it.

I've seen probably 50 videos on TV showing previous marches and what strikes me is that the participants are all WHITE. It stands to reason . . . we're the ones being taxed to support Affirmative Action, Welfare and other worthless social programs. It's our tax dollars going to ACORN and supporting the 12 million illegals swarming into our neighborhoods.

For the first time, white people (a.k.a. the lemmings) are finally awake and taking to the streets.http://www.stormfront.org/forum/showthread.php?t=589361

Since the right-wingnuttosphere is so fond of guilt by association, just thought I'd do them the same favor.