When sex and chocolate are a bit too much.

Thanks to The Nephew, we learn about this new service via the digital wonderland. Now you can tell someone you passed along a crotch cricket or worse and, the best part is, it's anonymous.

Really puts the casual in casual encounter, doesn't it? And this is just the thing that sets a social conservative's hair on fire; the casual anonymity, the shirking of responsibility when relative strangers (as opposed to strange relatives) have a slippery good time and then just walk away, without the vomiting and tears that plague Bible-bumping Republicans.

But there's a cavalier attitude to this card that even I see as a bit blase, considering the subject matter.

Christ, that's not even an apology. At least the faceless dude in the first panel has the decency to be mildly embarrassed.

Unless that's a rash.

But, seeing an opening (if you will), I'm quick to jump into what could be a real money-maker.

So, if you've given someone a pantload of woe recently and feel an itch to confess, you might want to consider one of these Dark Planet Cards: 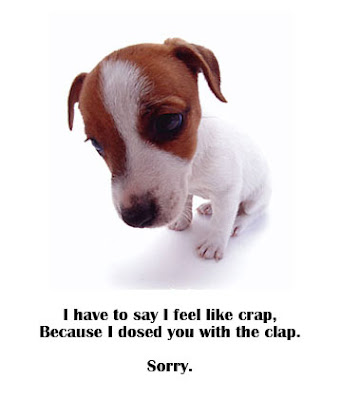 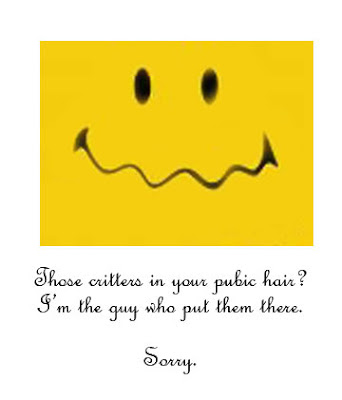 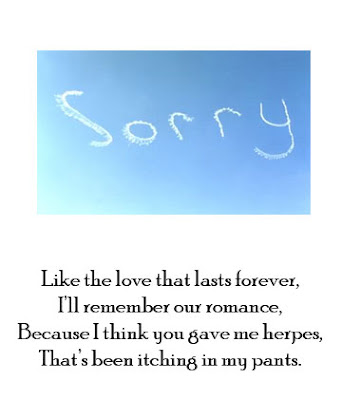 An Updated Extra: This for our men and women serving in uniform. Salud! 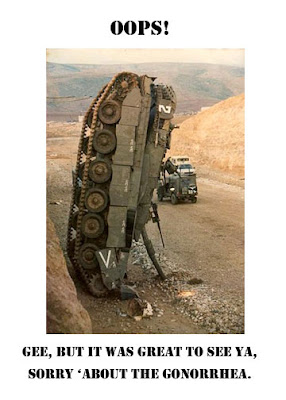 I could do these all day, but I have to go back to work. Feel free to write your own in the comments section if you're so inclined.

And Hallmark? Call me.

Posted by David Terrenoire at 9:50 AM

There's always room for more of these in the world. Thing is all the folks doing them stick to one subject. Apologies, valentines, birthdays.

You coul be full service. Sympathy cards, birthdays, those occasions when you get caught with that 16-year old in a pony girl get up.

And really, hasn't that happened to everybody?

I think you have great opportunities for an 'Errors in Military Operations' series, Dave. Expand that last idea; youth, high explosives and massive kinetic energy make for endless possibilities of hilarity.

Grandkid's a loader on a rapid-fire crew. I think about this stuff too much.

Your talent is wasted in advertising, David.

I know there will be many difficulties and challenges but I am determined to do it. If it does not succeed then it will be a lesson for me as well
catmario4.com