At Long Last, Sir, Have You Left No Sense of Decency? 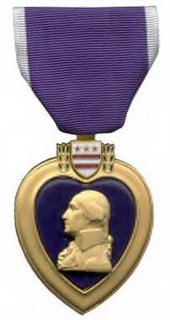 This is a Purple Heart. I have two of them in my desk. One belonged to my father's brother, a kid killed on Iwo Jima. The other belonged to my wife's father, wounded after parachuting into Normandy on D-Day.

The grinning asshats of the GOP disgraced themselves and this medal by shamelessly sporting Purple Heart band aids at their convention. These are the same people who claim to honor military service (as long as someone else's kid does the fighting). Now, I've been around the block a few times, but I'm still capable of being surprised by the depths of cruel, clueless hypocrisy that politics brings out in otherwise decent people.

Today I see they're going after another combat veteran. In today's NYT Op Ed page, James Webb, former Secretary of the Navy, takes a look at the swift-boating of Iraq war critic and fellow Marine, John Murtha.

A group called Cybercast News is questioning Murtha's right to his Bronze Star and Purple Heart. According to Webb, "Cybercast News Service is run by David Thibault, who formerly worked as the senior producer for 'Rising Tide,' the televised weekly news magazine produced by the Republican National Committee. One of the authors of the Murtha article was Marc Morano, a long-time writer and producer for Rush Limbaugh."

Rush Limbaugh, the guy who was 4-F because of a boil on his ass, and the Republican Party, home to chickenhawks like Tom DeLay, a man who said he didn't serve in Vietnam because minorities had taken up all the prime combat slots. That's right, those pesky minorities stole Tom's glory. I don't know about David Thibault or Marc Morano, but I'd bet good money that neither of them have been closer to a uniform than a Burger King paper hat.

Is George Bush and the GOP really this vindictive, this scared, this petty? Are they so lacking in basic decency that they allow their surrogates to attack an American's honorable service? These are the acts of bullies and cowards and they should be ashamed of themselves.

I have a suggestion for anyone who thinks this is just hardball politics. The next time you're in the airport, and you see a young Marine wearing that purple ribbon on his chest, go up and ask him if he bled enough to deserve his medal. Then e-mail me from the hospital and tell me how it went.

As each day passes in this country more people should be answering Yeah they are,....

and no they have no shame

Your comments are right on the mark, David. From the time Rush had attacked John Kerry for his military service and then John Murtha, I could only surmise Rush and others like him are jealous of men who have served with honor and valor in military service to their country. Rush and his "cohorts" can only respond with cruel remarks and seek to discredit these men for something they can never achieve - an act of bravery in service to their beloved country. And what must rankle Rush and Co. even more is the fact these men have shed their blood for this country. Something they are now too old to rectify and can only sit there throwing out ridculous remarks of cowardice.

It's good to be pissed, because the right-wing users of this tactic are reprehensible, loathesome slugs who deserve to be shipped off to Iraq themselves so they can witness first hand what the men they defame have witnessed. That they're willing to defame their own-McCain-simply for opposing Bush means that they don't even have any basic decency for members of their own party. And if they think they can use this tactic against the vets running for the midterms, they've got another thing coming. They can't hope to obscure their actions because of the amount of time that's passed, as they've done with Vietnam vets, and if they think there's no limit to the public's tolerance for this, they're flat out wrong.

The veterans of that time have, and will always, get the shaft.

I remember a young Republican in the 80's said when he found out I was a vet, "I thought you were smarter than that."

I hope you're right and these new vets kick some ass.