Too True For Fiction? 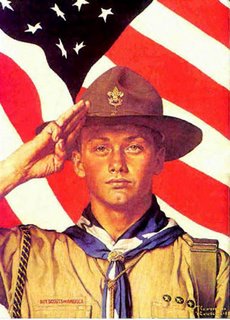 A friend of mine has a brother who swears he speaks Spanish, when in truth what he does is prattle Spanish-sounding gibberish. He says that his sister-in-law, a Puerto Rican, doesn't understand his Spanish because she's lived among Anglos too long. The guy's not brain-damaged, and in every other way except that he votes Republican, he's a normal human being. But he insists that he's speaking Spanish when he is not.

Now, if I put this in a story, I imagine more than a few people would say, "That's not believable." To those readers, my insistence that the guy actually exists would be moot.

In The Things They Carried Tim O'Brien manipulates what's true versus what actually happened until the reader has to consider what it is that makes a true story true and how fiction can be more honest than fact. He mixes fact and fiction so adroitly, constantly retelling the central story, that what actually happened no longer matters. The story is true to the time, the place, the people, and the event, even if it isn't solid, proveable fact.

We've seen reporters succumb to telling fictions to illuminate a story, and in those cases they've violated the Truth In Labeling law, if not the truth of the story. As writers of fiction, we have to draw on life for our made-up stories, and in my case, I lifted a real person out of my experience for a character in Panamanaian Moon. I changed little but his name, and he's probably the largest character in the book, much larger than the characters I made up.

So I'm curious, as storytellers, have you written something as it actually happened only to have readers not buy it? Conversely, have you ever made up a scene or character that is so real that your readers insist you took it from real life? If you use a real person, how much can you use without violating that person's privacy, or your friendship?

And what the hell is truth anyway?
Posted by David Terrenoire at 9:40 AM

Early on in my writing I used things from life that people didn't believe. But I think they didn't believe it, not because it was unbelievable, but because I hadn't set it up well enough. It's my contention that, no matter how ludicrous a scene or character is, given the proper set-up and exposition, anything can be made utterly realistic. It's about how you write it, not what it is.

Not that I know anymore, as I've essentially stopped taking things directly from my own life. And I never take characters from real life. Usually I find the plot/story tells me what kind of character this should be.

As for a fictional scene being so real people think it happened to me, yes, it happens sometimes. But usually when it's in first-person and the main character is supposed to be someone like me. I read out a story of sexual humiliation in my grad school class, with an "I" getting the humiliation, and while they liked the story a lot, everyone had a little trouble talking to me afterward. They all seemed rather embarrassed for me.

Oh, another point: No matter how original and not-from-life your characters are, your friends, family, & significant others will try to figure out who's who. Drives me crazy sometimes....

As for the Spanish...it is indeed true. My experience is with Puerto Rican Spanish, while where I live the Spanish I come into cntact with is primarily Mexicans. They have a difficult time understanding me, and vice versa. On the other hand, Dominicans, Cubans and Puerto Ricans understand each other well. It's not necessarily the words used, although there is a bit of that, it's the inflections, speed, the way different cultures chop up certain words. A Spanish speaker from Spain will likely have a hard time following Caribbean Spanish speakers at first.

Whenever I watch a DVD with English spoken by Brits, Scots or Irish...I always turn the closed caption on 'cause until I get into the rhythm of the way they speak, I just can't follow it.

I wrote a gas can-hustle scene verbatium into my first screenplay and everybody that has read it with the exception of the Missus, said it sounded fake. Such is life.