The hawks were right about Iraq. 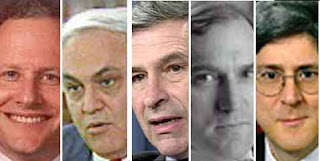 Back when the Iraq War was just a fevered dream in the minds of great strategic thinkers like Bill Kristol, Paul Wolfowitz and Dick Cheney, they foresaw the president being greeted in Baghdad with flowers from Iraqi children and cheers from a grateful public.
They were right. The Iraqi government rolled out the red carpet for the president last Sunday. A military band played the nations' national anthems, and officials kissed the president in a warm welcome.
What? You didn't hear about this? Oh, maybe because it wasn't our president. It was Iran's president, Mahmoud Ahmadinejad. Iran's president got the flowers from the children. He rode in an open car through Baghdad as thousands cheered. He got the smooches of friendship.
You remember Iran, right? A charter member in the Axis of Evil. Nuclear-minded mullahs with the ambition to toast your children? Remember them? Seems like Iraq loves them some Ahmadinejad.
Meanwhile, our president can't even ride in an open car in Washington.
Speaking of those great thinkers, remember when they told us that the war wouldn't cost us a penny? Really. They said it would all be covered by Iraqi oil. We would pay nothing. Zip. Zero. Nada. Bupkis. It would all be a glorious free ride.
Now, a book is out that adds up the cost of W's Big Adventure and comes up with a whopping 3 trillion dollars. I've said this before, but it deserves to be said again, I'm not good with money. When I have it I give it away. When I had no money, I bounced a few checks. But I've never bounced a check for three trillion dollars.
That's a boatload of zeros, my friend. That's a boatload of wrong.

"...the money spent on the war each day is enough to enroll an additional 58,000 children in Head Start for a year, or make a year of college affordable for 160,000 low-income students through Pell Grants, or pay the annual salaries of nearly 11,000 additional border patrol agents or 14,000 more police officers."

Just in case you missed it, that's for what we spend each day. But we won't get any of that now. Nope. What we will get for our 3 trillion dollars are veterans with long-term injuries, families with an empty chair at the table, broken marriages, broken hearts and a broken military.
Oh, and an Iraq that welcomes the president with a red carpet, flowers and marching bands.
Just not our president.
Man, those neocon hawks are smart. No wonder the New York Times hired Bill Kristol to write a column for their paper. Because he's smart. Real smart. And if you doubt that, just ask him.
Posted by David Terrenoire at 9:00 AM

Can you believe he was surprised to find out the price of gas? Couldn't decide if it was ignorance or duplicitousness. But really what's the difference.