Another assault on American manhood! 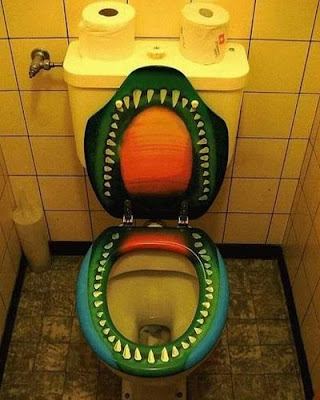 Economic meltdown, nuclear war between Pakistan and India, terrorists with names you can't pronounce and Dick Cheney still the vice president. If those things don't keep you awake, this should.

It's the danger of falling toilet seats.

Yes, dear readers, the centuries-old debate of up or down has taken a dark turn.

According to this piece in the Times, little boys have been getting their wangers mashed by falling seats.

A pediatrician at Leighton Hospital in England, Joe Philip, writes in the letters section about four cases of little boys who were injured when a heavy toilet seat fell and crushed the tip of their tender parts. [Ed. - YOW!]

One of the answers is a lighter seat. Or, some have suggested, we train our little boys to sit when they pee.
What? Sit when they pee? Why not just hand out skirts and Barbies, too?

Alert Bill O'Reilly! This is a direct assault on the American male winkie!

This will not stand!

At least not after someone's dropped a heavy lid on it, it won't.
Posted by David Terrenoire at 1:20 PM