Things to do while commuting to work. 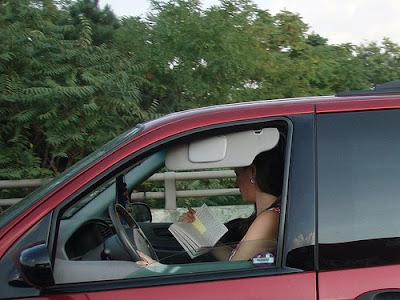 I have a commute that lasts, one way, between 45 minutes and an hour, depending on the number of jerks on the road besides me.

In just the past few weeks, I've had three 18-wheelers drift into my lane and two of them, I know were texting or dialing their cell phones. I saw them.

I also saw a woman eating and talking on her cell phone at the same time, something I'd find offensive in the food court, let alone barreling along at 65 MPH.

I used to work for a guy who thought he looked like some super-badass-busy executive guy if he read while driving. He didn't know it just made him look like a jerk.

I don't mean to imply that I don't have my hazardous moments. Searching for a CD under the seat, trying to read directions, changing your pants, rolling a joint, opening a wine bottle all could, in some quarters, be considered careless driving.

I even knew a girl in college who liked to...ah, you know where this is going.

I've discovered something that has made my commute, if not heaven, at least not bumper car hell. They're podcasts and since I broke down and bought an iPod, I've downloaded a bunch, from Fresh Air interviews to a bunch of British kids blathering about movies they've seen or not but it doesn't matter because it's all bollocks, innit?

I've tried a lot of different movie talk podcasts, from Elvis Mitchell's The Treatment to a pretentious show about film noir that has two post-graduate dweebs in a snoozefest about the symbolism of earth tones in Chinatown and other such English-lit esoterica. No, I am not making that up.

It was excruciating. As much I want to hear intelligent people talk about Dark Passage or Gun Crazy, I can't listen to these two guys drone on without wanting to puncture my eardrums with a number two Ticonderoga.

I've got an Italian language podcast and a podcast about music called Sound Opinions that's pretty good. I've got This American Life, which is almost always terrific, and Harry Shearer's Le Show, which I enjoy.

But the podcast I've enjoyed more than anything is the New Yorker Fiction podcast. The magazine's fiction editor, Deborah Treisman, askes a writer to choose and read a short story from the New Yorker archives.

and, as they say on late-night TV, so much more.

The great thing, besides hearing writers read terrific fiction, is hearing the writers talk about it with Treisman. They discuss why they chose the story, what they see in it, maybe some personal story. It's so good. And the episodes last almost exactly the length of my commute.

Give it a try. The New Yorker Fiction podcast.

If you've got a podcast you like and think we'll dig it, here's the time and place.

And here's something else to think about while behind the wheel: 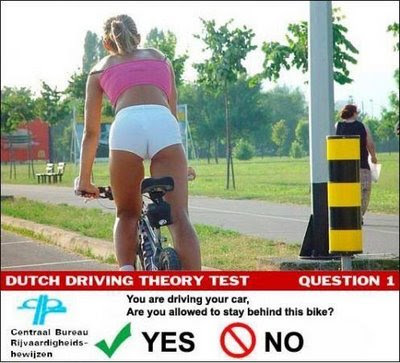 Posted by David Terrenoire at 9:15 AM

I'm a big fan of Garrison Keillor's The Writer's Almanac. You know, the same one that's on NPR. Has all the things that appeal to the short attention span of my middle-age mind: great writing trivia, a little snapshot of history, and poetry fed to you in a relatively painless way. I collect a week's worth of podcasts and listen to them on my morning walks.
Debby J

It's a good thing you've done here. Thank you.

I have started a whole blog on this topic: http://beautcommute.typepad.com/blog/

Thanks for providing such useful information. I really appreciate your professional approach.
中古車査定 | 中古車売却