Wondering what to get your 8-year-old for Christmas? 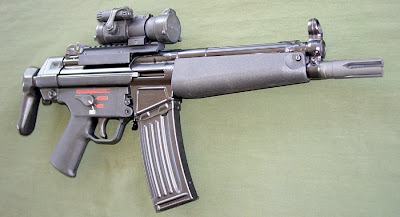 May I suggest this H&K MP5, a fine weapon and the choice of terrorists and anti-terrorist squads the world over.

I was reading Stephen Blackmoore's fine blog LA Noir about an idiot shooting himself which, in America, is about as newsworthy as a white man dancing like a jackass at an office Christmas party.

But one of his readers commented on this tragic story, which is a high water mark for Firearms and Stupidity.

WESTFIELD, Mass. (AP) — With an instructor watching, an 8-year-old boy at a gun fair aimed an Uzi at a pumpkin and pulled the trigger as his dad reached for a camera. It was his first time shooting a fully automatic machine gun, and the recoil of the weapon was too much for him. He lost control and fatally shot himself in the head.

Captain Obvious of the Westfield police said, "It's not a toy. It's not something to play with."

What is it about guns and stupid? Why is there such a high correlation between morons and civilian firepower?

As some of you know, I've owned guns for years. I hit this target at 25 yards with a GI .45 while competing at Camp Butner. I placed in the top 5 against graduates of the military academies. Not bad for a hippie writer. 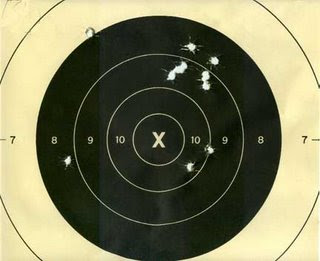 So, I'm not knee-jerk against firearms. They have their place. But giving an 8-year-old a full auto Uzi? I mean, WTF?

I've fired an Uzi on full auto. It's a fine weapon, but anything on full auto is going to ride up on you like Indian underwear, and if you're not prepared, you're going to lose control of that bad boy.

This was at a gun show. Supposed grown-ups were around. You'd think someone would have thought that 8 years old was a little young to be shooting anything bigger than a Red Ryder BB gun (with a compass in the stock). I mean, you could shoot your eye out.

But no. His father, high on cordite and testosterone, gave the kid the Uzi and switched it to full auto, grinned and told the tyke to give the trigger a tug.

Too bad the Second Amendment doesn't have a sanity clause. 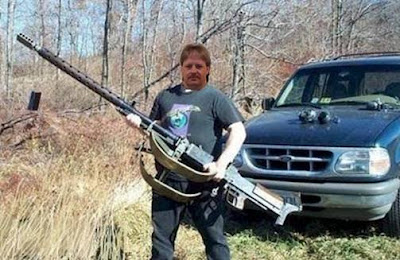 But as Chico said, "Sanity Clause? You can't fool me. There's no such thing as a Sanity Clause."

Posted by David Terrenoire at 9:23 AM

Please Dave, they were looking at it as his passage into manhood.