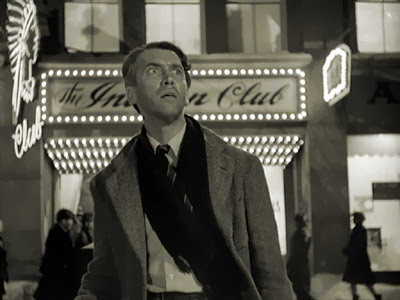 It's that time of year when, if I'm lucky, I'll stumble upon It's A Wonderful Life and watch George Bailey see what the world would be like if he'd never been born.

I admit, I'm a sucker for the ending.

But the middle part, the part when the addled Uncle Billy loses the dough and George loses his temper is a dark dark place. Wendell Jamieson of the NY Times agrees. I thought it was just me, but he likes Pottersville a lot more than Bedford Falls, too.

All these years I thought I was alone in thinking Pottersville had it all over Bedford Falls. After all, I'd grown up in a town a lot like Bedford Falls and I could not wait to flee that cramped little hick village as quickly as I could. 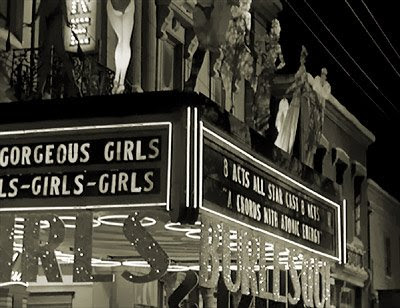 But Pottersville. The hot jazz and boogie woogie. The nightclubs and high-steppers that made Main Street look like Babylon awash in Hollywood snow? Damn, that's where I wanted to spend the holidays.

As Mr. Jamieson points out, the only entertainment available to the average Joe of Bedford Falls was the Bing Crosby yawner The Bells of St. Mary's. Christ, I'd have thrown myself in the river, too. 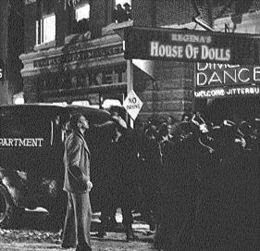 Pottersville had life. It jumped. It danced. It had cops flinging hot lead down crowded Christmas streets, pedestrians be damned.

And what happened in Bedford Falls? A kid falls through the ice. An alcoholic pharmacist almost poisons a little boy. Dance floors open up and nearly drown a gaggle of high school kids. Barely legal Donna Reed is caught naked in the street.

Except for the naked Donna Reed, Bedford Falls was one horrible disaster after another.

But in Pottersville, a man could gamble, get a snootful and then get taken away in a Black Mariah full of strippers and call girls.

Now, that's what I call Christmas.
Posted by David Terrenoire at 12:57 PM

Always thought this was a most depressing movie except for the end. Just look at the wild-eyed Jimmy Stewart in the pic. I'll take A Christmas Story every time.

There's a video on Youtube called "Bad Bailey" that is done like a movie trailer that shows strings together all of the George Bailey moments of anger, violence and bewilderment in a really interesting way. It's very well done.

Here's the address. Seriously, give it a look

Bedford Falls is the kind of town where a guy quietly goes insane until the day he quietly kills his whole family and everyone says how they never expected it because he was such a nice guy, just like everyone else...

What a greatly disturbing trailer.
Thanks.

Thanks for this post! i really enjoyed reading it!!!

I have just downloaded iStripper, and now I can watch the best virtual strippers on my desktop.