There's always that one guy.

A while back, the Typhoid Mary of American economics, Phil Gramm, chastised America as "a nation of whiners" and suggested that our economic woes were all in our head.

Jesus, what an asshole.

But, as we all know, he's not the only asshole on the block. Hell, the GOP wouldn't exist as a party without the flaming assholes they call their base, as personified by Joe the Plumber.

From Japan we get the comforting (?) news that the quality of being an asshole respects no international boundaries. That smiling man is Japanese Prime Minister Taro Aso (pronounced ASS-ho) who has a history of stepping in the shimogoe.

In the past he's made fun of physicians, the mentally ill and much like Rush Limbaugh, another notorious asshole, he thinks wartime torture and brutality are all just part of the fun, like fraternity pranks.

Recently, this Aso wondered just what the fuck old people were good for. He called Japan's seniors "hobbling malingerers" and wondered why he should pay taxes to support a bunch of people "...who laze around eating and drinking and never do anything...”

In an interesting parallel, this Aso may have done for his political party what George Bush did for the Republicans. See, one out of every five voters in Japan is over 70 and there's an election coming up. And just to make sure he'll never be able to find refuge in Florida, he suggested Japan would be better off spending its time attracting "rich Jews." 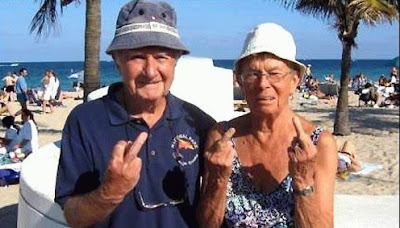 Here, residents of the Sunshine State give Aso their votes.
Posted by David Terrenoire at 9:20 AM

I cannot wait to call my dad a hobbling malingerer tonight.

LMAO -- Laughing my Aso off! Love your blog!