The hell with king... 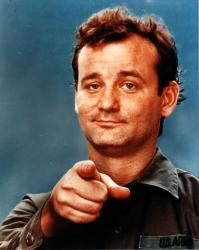 It's good to be Bill Murray.

According to a story in this weekly news magazine, cleverly titled The Week, Bill Murray crashed a party of young Norwegians in Scotland. He drank vodka, posed for pictures and even helped clean up the dishes. A young man is quoted as saying, "He couldn't fail to have a good time. The party was overflowing with stunning Scandinavian blondes."

Bill Murray has had a great career. He was one of my favorite SNL players (The Lounge Singer, Todd) and he's carried a few of my favorite movies - Groundhog Day, What About Bob, Rushmore, and Lost in Translation.

Recently, another blogger asked if we could be anyone else, who would it be, and I drew a blank. Now I think if I had a choice, It would be Bill Murray.

A great career, vodka, and stunning Scandinavian women. Life could be worse.
Posted by David Terrenoire at 7:35 AM

I think that "absurdist slacker character" JD describes is the Murry everyone would want to be, at least any self respecting wannabe slacker.

I'd rather come back as myself to do it all again, only I'd trade off a couple of the blondes for two of those swedish ones.