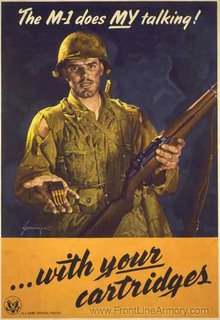 After plumbing the depth of my crazy this week, it probably isn't a good time to tell you about my new acquisition, a fine piece of history in 30 caliber, an M1 Garand, the rifle that Patton called "the greatest battle implement ever devised."

Several years ago my nephew asked me if I wanted an M1 and being half tanked I said sure. It's been at my brother-in-law's place until last weekend when I picked it up and brought it home. Now I need to find a rifle range and in this part of North Carolina, that's not easy. For some reason, people are a bit queasy about semi-automatic firearms with an effective range of 400 yards.

I've never fired an M1. I shot my father's bolt action deer rifle when I was a kid, a variety of shotguns, and trained on the M14 and M16, but this is my first M1 and I'm looking forward to sighting in this 65-year-old rifle and seeing just how good we two old bastards are on the long range. Fred Rea understands, I'm sure.

I find it a good omen that I have this rifle in my office as I bury deeper into the 1941 novel, which is going well, by the way - up to 7000 words and I solved a major plot problem. As is usally the case, the fix was so simple it had eluded me for two years.

So, until I find a range, I don't know what the hell I'm going to do with this old firearm, except put it over the mantle in my new office. But there it is, a 14 pound (try carrying that around all damn day) piece of military history.

And yes, my wife is so thrilled.
Posted by David Terrenoire at 7:17 AM

We have an outdoor shooting range here in L.A. that the LAPD practices at. They'll even let you shoot black powder. Once a week they have a wild fire night. The one shot per second rule doesn't apply for an hour. It gets noisy.

If you're looking for a place to have it fired, well, I'd be happy to hang onto it for a while and test fire it for you.

Really. It's no trouble.

You have such a generous heart.

I envy you, amigo. Not sure what part of NC you live in, but if you can make your way to Fort Bragg and get in contact with Range Control there, I'm sure they could help you find a range. I also know there are other civilian ranges outside Bragg, in and around Fayetteville, which could also probably accommodate you.