We've been here before. 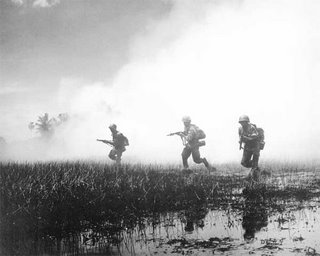 Recently the Times reported on American weapons coming up missing in Iraq and then being resold on the black market so militias can kill one another when they're not busy killing us.

The story tells us that the Pentagon, brilliantly run by Mr. Rumsfeld, has once again screwed the pooch in the worst way. For years our military command has ignored standard Pentagon regulations for registering weapons transfers.

Ignoring the rules to disastrous effect, yeah, that sounds familiar. In fact I think it's our new national motto.

Of more than half a million rocket-propelled grenade launchers, assault rifles, machine guns and sniper rifles turned over to Iraq, we've only tracked 12,000 of them.

So how is this like Vietnam? As reported by Neil Sheehan in A Bright Shining Lie, when we first got involved in that nasty business, the Viet Cong were fighting with weapons dating back to WWI and WWII. Old bolt-action rifles and crap machine guns left behind by the retreating Japanese.

The Pentagon fixed that in a hurry. They started funneling modern American weapons to village defense forces who quickly turned around and sold them to the Viet Cong.

And for the nuoc mam-flavored icing on top of this stinking crap cake? We got ourselves a nice Orwellian name. It's called the Iraq Relief and Reconstruction Fund.

But wait, before we talk about how this administration's ineptitude and hubris are arming our enemies and sending American boys home in boxes, let's take a few news cycles to focus on John Kerry's mangling of a joke.

Yeah, that's how to honor the troops.

Jesus. We are so fucked.
Posted by David Terrenoire at 12:54 PM