I need your opinion. 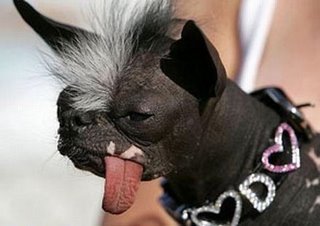 I know, you're shy, and would never stick your nose into another person's work without an invitation. So consider this an invitation.

Here's the scene: A southern woman is in a terrible marriage to an English philanderer. He's been involved in a murder, blackmailed, threatened, and generally had a very bad time of it. He smells, he hasn't changed his clothes and he's on his third Bloody Mary. When his wife sees him on the morning after she says, "You look like something that's been run through a dog."

He responds with "Spare me your earthy aphorisms."

They want me to change her line to "Peter, you stink."

OK, so that's not so good, and I could change it to something better, but I like the line as it is. I asked Jenny about it and she said she'd never heard "run through a dog" before and I told her it's because I made it up. She was underwhelmed. So here's what I need from you.

A. Should I keep the line?
B. Should I rewrite the line something like this - "You look like something that's been run through a dog and left on the lawn."
C. Should I find another line?
D. Should I write, "Peter, you stink," cash the check and get back to writing my novel?
E. Or do you have a better line? I'm open here.

Talk to me. Right now I feel like it's the script that's been run through a dog.
Posted by David Terrenoire at 6:57 AM

I'm more surprised they didn't complain about 'earthy aphorisms', they sound like the kind of people who'd need to phone a friend and get them to look it up in a dictionary.

It's a good line, but given how much you already love this project, I'd be tempted to take the cash and get back to your book, which is going to be much, much more satisfying. And I know that's hypocritical of my - I'd obsess over it too.

It's an excellent line, Mr T. And like Stuart, I'm going to be incredibly hypocritical here and say change it to whatever they want. I actually think Peter's "earthy aphorisms" is funnier that way. Pocket the cash and walk away.

You could change it to something else.
There are tons of those types of lines.
My favorite is "You look like you've been to hell and back, only most of you never made it back." The reply of course is "You're right about that, I'm still here with you."
Or you could just take the money.
Take the money.

I do like "You look like something that's been run through a dog." And I could swear I've heard it somewhere before.

"You look like you been shot and n' missed, then shit at n' hit."

and the classic "You look like you been rode hard and put up wet."

All that said, this is work for hire, no? If they're that adamant about changing it, change it. If the changes make it so bad you can't live with it, you could always use a pseudonym. I always liked "Kilgore Trout."

If they're adamant, change it and cash the check.

If not, ask them if it's the swearing they object to. If not, come up with something else.

Then get back to the novel.

I'd change it and cash the check.

I'm not a southern woman - just a damn Yankee - but would a genteel southern woman (she's married to a professor so I'm going to assume she's not white trash) say something so...gauche? I think she would say, "Peter, you stink."

Then again, I could be wrong.

It's a great line. And they are asshats. I'm with Mr. MacBride on this one. I'm surprrised they didn't have to look up "earthy aphorisms".

This project is not worth the time and trouble you're putting yourself through. You've got more important work to do than this (though I would like to see the gratuitous sex when it's finished - just sayin'). So give them the line, be done with it and get crackin' on the novel.

Besides, you can use the line later.

Like Stuart, I'm more surprised they didn't complain about 'earthy aphorisms'. As to the other line, around here you'd say he looked like a dog's breakfast.

It really comes down to how much time you want to spend on this, as everyone else has already said.

The public loves the word "stink" though the line does sound vaguely derivative of practically the same line in Top Gun, when Tom Cruise's character Maverick says: "Hey Slider [sniffs]. You stink!"

Do their bidding, take the money & run. Fast. And then get back to YOUR book.

How about "Whew, you smell like a hog killin'." I'll spare you the description of what that was like in the old days in the mountains of NC (as told to me by Vern).

Your phrase is great, David, but I think that it'd be more effective to get across how he smells rather than how he looks, given that his appearance ought to come across on the screen (unlike his smell). I'd suggest 'you SMELL like something that's been run through a dog' as a compromise. It retains your originality and also says that he stinks. Retains what you want and also gives them what they want.

That is a great fix. I'll try it. You know, you may just have a future in this business.

And for those of you keeping score at home, the mail is running about 24 to 1 to cash the check and get back to work.

Take the money and run, dude, right back to your book.

I liked Al's solution. And, since they are in love with "stink", How about, "You stink like something that's been run through a dog!"?

Whatever, it's your screen play. Personally I would change it but be damned if I changed it to what they wrote, which really stank!

Now that we've all helped you so much do we get a cut of that paycheck? No doubt it will be huge.

I agree with the producers. The line is one of those lines that is almost there, but not quite. You are reaching with that one. It's because "run through a dog" meaning is not immediately clear. ?What is run through a dog, exactly?The dog ate it and crapped it out. Why not say you look like something the dog just crapped out.

That's pretty gross, no subtlety, however. It is kind of funny, though. Run through a dog has the advantage of being a bit more subtle.

40 miles of bad road is immediately clear, ridden hard and put up wet is as well.

The good thing about it is that it is original. You stink is a cliche.

Say it with drawl, which is how it's meant to be said, and it is music to my ears....