Radio girl speaks, but Houdini does not. 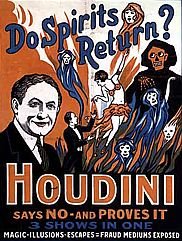 Harry Houdini is still dead. The New York Times reported that a bunch of magicians and Houdiniphiles got together yesterday, the anniversary of Harry's demise, and tried to contact him. He's still not talking.

They placed an empty chair on the stage for Harry. A woman named Anna Crankshaw, with the emphasis on crank, brought the chair because she's the great-granddaughter of a medium who had issues with the great Houdini, like that makes sense. But hey, maybe she knows something about spirit bums that I don't.

William Kalush, hawking his new book "The Secret Life of Houdini" tossed in some much needed sex by hinting at Houdini's philandering ways. Seems like the women were just wild about Harry. Maybe it was the handcuffs.

My favorite member of the 13 magicians and Houdini experts was Dorothy Young, who in spite of her name was 99 years old. Dorothy was in Houdini’s show in the 20's. She was “the radio girl,” which meant that she never ate before a performance because “I had to fit in the radio.” I'm assuming a radio in 1925 was bigger than an Ipod. She said she had talked with Houdini about this returning-from-the-dead stuff and “He told me, ‘It’s humanly impossible,’" which is what made him so great. No bullshit.

I don't share America's fascination with Houdini and I don't know why. Maybe it's the escape tricks and the Mystery Cabinet stuff. I like small magic, sleight of hand, but the big things like making the Statue of Liberty disappear is just tawdry show biz and if Doug Henning is a star, you know it's gimcrackery.

But Harry, if you're out there, how about answering the one question that has plagued humankind for years: How in God's name did David Copperfield bag Claudia Schiffer?

We want to know. And if it exists, we want the video.
Posted by David Terrenoire at 7:21 AM

Ummm... what do you mean by emphasis on "crank?" And, being a skeptic, I doubt I know much more about spirit bums than anyone else.

But I do agree with you about Claudia Schiffer - Inquiring minds want to know...