Just back the fuck off. 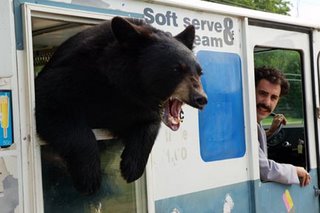 I understand the movie is very funny and if it's as good as the Borat segments of Da Ali Gi Show, then I know I'll like it.

And if anything is funny, there's going to be a line of people tut-tutting, their butt cheeks clenched tighter than a vise, wagging a finger at comedy that dares to be, quel horreur, impolite.

John Tierney, the conservative columnist at the Times, weighed in with his usual pithy analysis of things he's too blinkered to understand. He says, "Borat is more like the class bully picking on the nerds. The hip urbanite ventures into flyover country disguised as a Kazakh yokel to see how the American yokels respond. Are the rednecks just as barbaric?"

Well, gee, John, I think that's kind of the point, isn't it? When a bunch of Arizona goat ropers sing the Kazahk pop standard, Throw The Jew Down The Well, they join in the chorus with more enthusiasm than Tierney can write off as just Americans being polite to the amusing foreigner.

Which is professional drunk Christopher Hitchins' point when he says that Borat takes advantage of Americans' innate decency.

Because that's what's so great about comedy. If you find your diaphragm convulsing and you're making involuntary barking noises until your sides hurt, it's working.

And if you're the target of lawsuits by a celebrity wannabe from Turkey, an entire Romanian village, and two misogynist bigots from South Carolina, that's proof that you're not only making people laugh, you're also making a pantload of money.

So, without seeing this movie, I can guarantee it's funny because it's making a lot of people like John Tierney unhappy. Which makes me happy.

And does this have anything to do with writing? You bet it does. I'll leave you with this wisdom from Chris Rock: "If no one is uncomfortable with your act, you’re probably not digging really deep into yourself."

Amen. Now go forth and make someone uncomfortable.
Posted by David Terrenoire at 7:10 AM

Borat was on the John Stewart show and made me laugh so hard I nearly choked. I'm definitely going to see this movie.

I'm not a big fan of comedy of embarassment, but there's a tiny bit more than that going on here. I had to laugh at Kazahkistan getting all pissy. If anyone's unhappy, it should be the US. Borat's movie is a more accurate view of the true attitudes in this country than most Americans are comfortable with...that's a good thing.

Roger Ebert once made this point about movie reviewing. He said something like, "In a review you have to be honest with your audience. And, honestly, I laughed all the way through Jackass."

I don't know if they refilmed the "Throw the Jew Down the Well" bit, but in the version I saw on TV the crowd reactions were decidedly mixed, ranging from enthusiasm to amusement at and playing along with the crazy guy to "What the Fuck?"