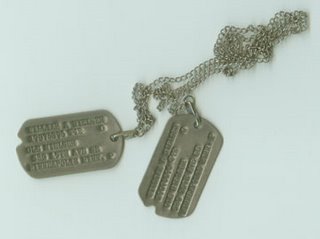 Every now and then you need to get slapped upside the head and this week I got slapped in a big way. I had lost faith in Americans and given up. They showed me how truly stupid I can be. I've never been so happy to be wrong.

And now we have this confluence of Election Day with Veterans Day, tying one to the other, inseparable in a way that should give each of us pause to consider the people who serve. Yesterday the Times ran a terrific article about a Marine unit getting the news about their boss, Rumsfeld's, retirement. Here's an excerpt:

The marines had been on a continuous foot patrol for several days, hunting for insurgents. They were lost in the hard and isolating rhythms of infantry life. They knew nothing of the week’s news.

Now they were being told by an Iraqi whose house they occupied that Rumsfeld had resigned.

The sergeant went upstairs to tell his marines. “Rumsfeld’s out,” he said to five marines sprawled with rifles on the cold floor.

I love that. Who's Rumsfeld? No bullshit. Just a young Marine doing a nasty job. He's not doing it for Republicans or Democrats, and he sure as hell isn't doing it for the money. So why is he doing it? Here's more:

Another marine, Lance Cpl. Patrick S. Maguire, said the decisions that mattered here...were much more important to them than those made in the Pentagon back home...

When to go on patrol, when to come back, which route to take down a road, which weapon to carry, and, at this moment, which watch each marine would stand, crouched up on the roof, in the cold wind, exposed to sniper fire...

His grandfather fought at Iwo Jima, he said, and his father was a marine in Vietnam. This was his second tour in Iraq.

Someone points a finger at you, and you go. I've never heard it said so concisely.

So to all those who went when they were called, I thank you, and hope you've enjoyed this Veterans Day. We wouldn't have had Election Day without you.

Oh, and welcome home.
Posted by David Terrenoire at 6:21 PM