Blue Murder Christmas from the Grave. 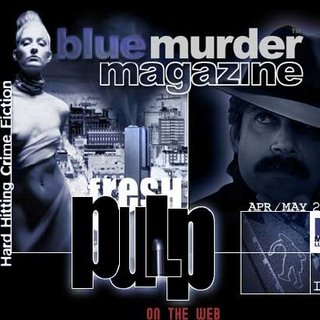 I posted the Blue Murder Martini recipe simply because I was busy and wanted to give you Planeteers something to keep you off the street, but it got me all nostalgic, thinking about Blue Murder and what a pioneering web magazine it was.

In those days, way back in '98, web publishing was looked on as the retarded cousin of print mags. There was something not quite legit about pixels. But David Firks (that's him up there with the mustache) started Blue Murder and soon they had their own stable of very dark writers and even a woman of mystery on the cover, naked breast and all. The lovely Elise Lyons, the gatekeeper who decided who made the cut and who didn't, never fessed up to the ID of the Blue Lady, even when offered bribes. We all fantasized that it was Elise herself.

There was never much money in Blue Murder. Less than even the pulps of the 30's and 40's. The most I ever got was $50 for the contest winners and $40 for submitted stories. But it beat free.

And there were some great writers, including a guy named Kevin Smith who published his first piece in '98, issue #2. That year Firks published short stories by Gary Lovisi and J Michael Blue. By '99 Andrew Vachss sold a piece and Gina Gallo, the great ex-Chicago cop and tough as a rubber biscuit, made her debut with Live From a Dead End Street.

That was the same year Kevin Smith became Kevin Burton Smith, writing terrific columns about PIs for every issue that followed.

In 2000 we read a story called No Sin Is Final by a guy named Victor Gischler. I wonder whatever became of him.

There was to be a second volume of Blue Murder stories, and a Best Of, but they never drew breath. I have the first 14 issues and if you'd like a copy, I'm going to be giving one or two away, as soon as I come up with a good contest.

UPDATE: Who has time for a contest? Fuck it. If you want a copy of the first 14 issues of Blue Murder, send me an SASE big enough to hold a disk (padded is preferred) and I'll send you a copy for free. It's my Christmas present to all the Planeteers just to say thanks for sticking with me this year. To get my address, drop me a line at davidterrenoire@hotmail.com.

*By the way, that cover up there is from Tribe's archives. If he hadn't saved it, I would have had to put up a picture of these guys.

Posted by David Terrenoire at 9:30 PM

Wow, a new look, a cult murder magazine and a martini recipe? I should drop out of the blogosphere more often!

LOVE the title! Pity the magazine didn't last, but I'm all for your revival. Will scrape up something under 1K whenever you're ready! And your martini recipe is to die for!!

How many of us got into crime fiction because of BLUE MURDER. I understand their demise is actually a story that's been repeated several times since (including my own publisher).

Sad, but then look at what they left behind. Gischler, Goldberg, Thrilling Detective...

I never got to be a part of it, but the motivation to submit resulted in my first story in PLOTS WITH GUNS. (There's another one that had a happier ending, but left a lot more in its wake than it brought in.)

We'll never see the likes of it again.

Ah, Blue Murder. Back in those heady days when the internet was young and carefree.

I actually had four stories accepted at BM, but the mag folded before any of them ever appeared.

One of my great regrets.

This was before my time, but it sounds legendary. And sad. We've come a long way...

Nice to bump into this...

I know how Dave died, we were best friends.