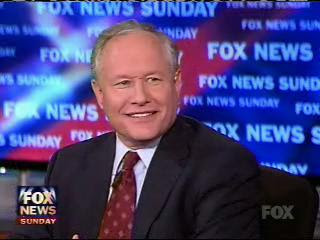 This is New York Times columnist, William Kristol, a man who became famous by being Irving Kristol's son.

Once a week, Kristol writes a fact-free Op-Ed piece for the Times and yesterday he penned a brightly-polished turd that is right up their with the best of his best work.

He was writing about this MoveOn.org ad:

If you haven't seen it, it shows a young mom with her baby son, Alex. She tells John McCain that if he's serious about staying in Iraq for 100 years, and he's counting on little Alex to feed the cannon, he can look elsewhere.

Sure, like any 30 second ad, you can pull it apart by its loose threads, but the message is still there - war requires mothers to sacrifice their sons and daughters. When asked to make that sacrifice, many mothers, both Democrat and Republican, say they would rather not. It's how moms are.

Bill Kristol thinks Alex's mom is selfish. He quotes an unnamed mom blog commenter, the most reliable source ever, as saying:

“...Someone has to stand between our society and danger. If not my son, then who? If not little Alex then someone else will have to stand and deliver. Someone’s son, somewhere.”

"The MoveOn ad is unapologetic in its selfishness, and barely disguised in its disdain for those who have chosen to serve — and its contempt for those parents who might be proud of sons and daughters who are serving. The ad boldly embraces a vision of a selfish and infantilized America, suggesting that military service and sacrifice are unnecessary and deplorable relics of the past.
And the sole responsibility of others."

Let's leave aside Kristol's overwrought interpretation of this mom having contempt for people who serve. Let's overlook Kristol's conflation of the disaster in Iraq with all wars that depend on the sacrifice of men and women like my brother and sister, my father and his brother, Jenny's father and, the least likely soldier of all, myself.

No, let's look at his last umbrage-laden sentence, that service in MoveOn's view is "...the sole responsibility of others."

For those of you who may have forgotten, Bill Kristol, besides being a crackerjack columnist, was also one of the leading lights behind the Project for the New American Century, or PNAC. PNAC was a collection of brilliant minds, all of them thinking as hard as they could about international things. You might have heard about their most innovative product. It's called the Iraq War.

So, who, among these brilliant architects of the misadventure in Iraq, served?

No, when Bill Kristol had a chance to take someone else's place in the line, to serve his country as he wants Alex to, Bill Kristol stood with his fellow PNAC patriots and said, "Let somebody else do it."

When I get lectured about "...those who have chosen to serve — and ... parents who might be proud of sons and daughters who are serving" by a man whose closest brush with uniformed service comes when he orders a Big Mac from the back of his limousine, I think this is as useful and full of intellectual integrity as Kristol's paper-thin patriotism.

So to you, Mr. Kristol, this old enlisted man suggests you take your precious respect for the people who serve, roll it up into a tiny, little ball, and stick it firmly up your ass.

You know, where your head usually is.
Posted by David Terrenoire at 12:43 PM

That ad makes me cry and that's what scares them. Ten million crying mothers. (And dads)

a man whose closest brush with uniformed service comes when he orders a Big Mac from the back of his limousine,

I LOVE this quote.

Rhodes is right. Good line. You could write comedy if you weren't so dark. But then there's dark comedy.

Surely it’s relevant to point out that pointing out we have a volunteer army has nothing to do with it.
The military doesn’t go out to the street corner and proclaim: “We are going to have a war in Iraq. If anyone would like to sign up for the military and go fight, please volunteer”.
There have been wars were people signed up after the war has started. But that is not the case today. For the most part people volunteered to “serve” in the military and give up their right to dissent later in doing so.
It is certainly the prerogative of America mothers and fathers to voice their objections to a war buy saying “not with my child”, especially since it is not only their sons and daughters being sent overseas but their money.
Super Chicken told Fred: “You knew the job was dangerous when you took it”.
But that doesn’t work here; it only begs the issue of whether our resources should be sent to Iraq the first place.
Missing the point is pretty much par for the course in political editorials.
And here is the rest of “the point”.
It’s my point anyway.
I’ve seen it and you have too.
Mohammed is driving around with his kids in the car going along with is life in Iraq.
But who is manning the streets?
It’s some American mother’s son.
(Maybe some of those “hard working” Mexican illegal invaders that McCain wants to give amnesty to could be conscripted for military jobs that Americans “don’t want”. There’s an idea. See if they like getting shot at for someone else.)
Freedom and democracy is great if you can get someone else to die for it.
And besides if the Iraqi had to fight for himself, might have to kill a fellow Muuuuuuslim.
If that kind of “Muqtada al-Sadr crap” were going on in America, I’d be down town with my Mini-14 asking where to sign up for the “coalition militia”.
(THANK YOU SUPREME COURT FOR RULING ON THE 2ND AMENDMENT)
And what about the Iraqis coughing up some of that Iraqi oil to help pay for it all?