Did somebody drop America on its head? 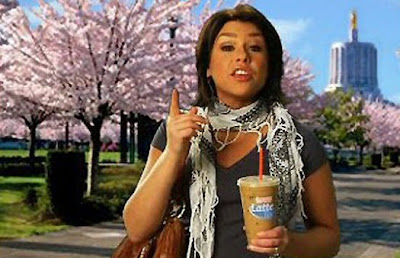 I didn't think I could be surprised by the depths of Michelle Malkin's stupidity, but this recent dust-up had me shaking my head. Rachel Ray, a person I didn't know existed before this flap, had the audacity to appear in a Dunkin Donuts commercial wearing a SCARF! Based on this scarf's print, Malkin sussed out a terrorist thread and went all crazy, which for Malkin is crazy on a scale rarely seen outside of upholstered rooms.

And because Malkin is considered a credible source by right wing bloggers, the crazy swept across the country and Dunkin Donuts, in a craven display of corporate cowardice, pulled the ad instead of telling this handful of loons to suck it.

It's enough to make Jesus drink himself to sleep. When I was a GI, this was a common greeting among the brothers and self-conscious white guys. It was "doing the dap." And yes, while we were armed, and we did have a major grievance with our government, we weren't terrorists.

Finally, while this ran a few weeks ago, it deserves another look. Fox News makes assassination of a presidential candidate funny. Ha. Ha. What a great joke.

And while I am certainly not the most stable person in the world (you knew that), these people make me look like a poster boy for mental health.
Posted by David Terrenoire at 9:11 AM

what we DID NOT do was the TERRIST FIST BUMP!!!

Rachel Ray is a MANCHURIAN CANDATE guess SOME folks here are ready to eat some donuts. NUFF SAID

Goodness but I'm no fan of Fox etal,

However, scarf? not so smart choice by either stylist or Rache.