Some Monday odds and ends. 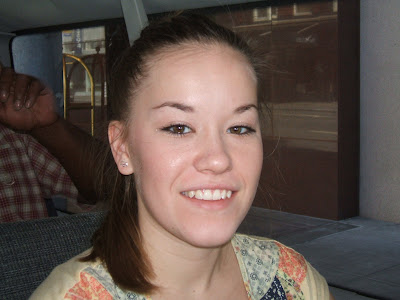 The Good: As we were leaving San Francisco last week, we met this lovely woman, Amanda. Amanda is a ballet dancer and had just come from a successful audition. Amanda's husband, Jose, is a Navy corpsman serving in Afghanistan. When I meet young people like Amanda, it makes me think this country's going to be all right.

I've posted before about how the two cultures, the arts and the military, seem to be growing farther and farther apart, but here's a young family where these two live both to the fullest. Hoo-uh. 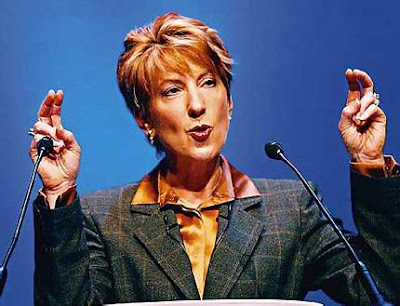 The Bad: This is Carly Fiorina, John McCain's senior economic advisor. I caught her on TV this morning laying out McCain's well-considered, nuanced economic plan. Are you ready?

And Ms. Fiorina knows a thing or two about being canned. Hewlett-Packard let her go after some of her ideas resulted in a few thousand people being laid off and, the ultimate sin for any CEO, lower stock prices. The poor woman, after her failure, was forced to walk away with a paltry 21 million in severance.

This is the woman John McCain sent out to sell an old sack of bullshit as premium fertilizer. I wish her luck.

The Ugly. I saw this bumper sticker on a van with Florida tags today. The van was being driven by an angry old man who cut a guy off, nearly causing an accident. When the aggrieved driver honked, the old man gave him the finger and then proceeded, as Florida law demands, to drive in the left lane with his blinker on. No, I am not making that up. What an asshole.

As a side note, I'm writing an article about tattoo removal and I'm looking for stories. Anyone?

Posted by David Terrenoire at 7:21 AM

Glad you are on holiday. Surprised you didn't mention The Rock's bookmobile (cart) connection. Did you get the headset thingie? We took the night tour which -- dang near -- scared me outta a life of crime.

Enjoy! And thanks for the travelogue.

Spike, we did do the audio tour. I can imagine the night tour has a very different character.

Tax cuts seem to be the Republicans' answer to everything including budget deficit, budget surplus, economic boom, economic recession, crabgrass, acne, and the gum disease gingivitis.

But if cutting taxes is so good for the economy, why aren't we doing better after seven and a half years of Bush tax cuts?