Fiction, nonfiction and why doesn't this guy get it? 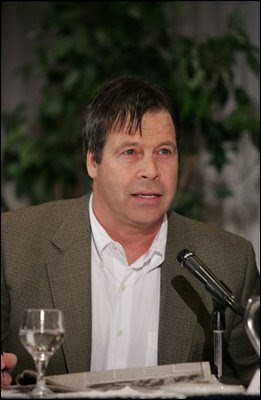 This is Jack Shafer, one of the editors at Slate magazine, and he seems to think that David Sedaris, the man who came to fame with a story about his part-time employment as a Christmas elf, is a reporter, as in someone who should tell the story EXACTLY as it happened, with no embellishments.

As Jenny (and I suspect the spouses of many of my readers - you know who you are) will tell you, I can spit out the same story three times and each time will be different. Early in our marriage she asked how that could happen and I reminded her that she did not marry an historian. She married a storyteller. She has come to accept the difference.

But Mr. Shafer does not. He wants to read Mr. Sedaris and know that everything is the precise truth, note for note as it happened. As an example he says, "I find stories that are absolutely true—like the time one of my neighbors, dressed up to party on Saturday night, fell into a 55-gallon drum filled with human excrement and urine—the funniest."

Ha ha. A guy all dressed up falls in shit. That's hilarious.

Perhaps that's why David Sedaris is widely read and Jack Shafer is not.

It's called entertainment. It's not history. It's not reportage. But Shafer gets this b&w distinction in his maw and shakes it like a rag doll.

"If writing fiction is the license Sedaris and other nonfiction humorists need to get at 'larger truths,' why limit this exemption to humorists? Let reporters covering city hall, war, and business to embellish and exaggerate so they can capture "larger truths," too. I'm sure that Stephen Glass, Jayson Blair, Christopher Newton, and Slate's "monkeyfishing guy" would back this idea, especially if applied retroactively."

Except they're not. I'm on record with my umbrage over fictional memoirists, but Sedaris is not in that school. He's a humorist.

And if you make me laugh, I'll give you all the license you need to rearrange facts.

Is that so wrong? I don't think so.
Posted by David Terrenoire at 8:24 PM

I'm currently reading Bill Bryson's The Life and Times of the Thunderbolt Kid, which is his account of growing up in the '50s. It's wildly exaggerated at times, and certainly not the exact truth at every turn, but it's very funny. And some parts of it are indeed the exact truth. They're obviously well-researched reportage. I can even tell the difference.

If my writing starts out as "The History of..." or my hand happens to be on a stack of Bibles with penalty of law hanging over my head, with the aspect of doing hard time and paying a fine if I so much as quiver with the truth as I know it..then yeah I tell it like I best remember it. Otherwise, it's my lie and I'll tell it like I want to! (Five miles, in the snow, uphill, both ways)

Sometimes, when reading the draft of a newspaper column, my wife will furrow her pretty brow and say "but I never said anything like that." I go, uh, hello? Comedy?

I wonder if he ever read 'Running With Scissors'?

Jack Shafer may be off-base here but he's usually a pretty perceptive guy.

So, by Jack Shafer's reckoning, I'm supposed to have a receipt from the five-dollar crack whore in my first set, and the ticket I got for running the 84-year-old grandma off the road.

Yeah, that makes sense. I'm pretty sure Ron White really did tell the NYPD cop he was drunk in private, and Dane Cook really did tell his friend that he had a hologram of himself watching TV to foil burglars.

Because, as we all know, if it's funny, it's true. Must be. I read that somewhere on teh intrawebs.