Snapshots from the edge - Day 1 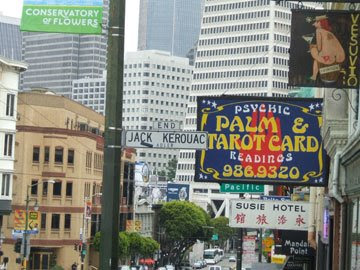 Jenny and I had an interesting trip. We missed two planes, caught a standby in Chicago, and our luggage went on a brief tour before joining us later in our hotel. All in all, not awful, considering the tragic state of air travel. It reminds us that the words travel and travail have the same origin.

The first thing we discovered was the wisdom of Twain 's observation that the coldest winter he'd ever spent was a summer in San Francisco. The high was 51. The low was 50. Today is the first day of June. Where are we, on the moon?

We spent much of the day yesterday in North Beach, walking from Washington Square up Columbus. For all those Americans freaked out about Mexicans, they should take a stroll through this neighborhood. In the space of 6 or 7 blocks, we heard Italian, Mandarin, Vietnamese and a babel of tourist languages. Lou Dobbs' head would explode. 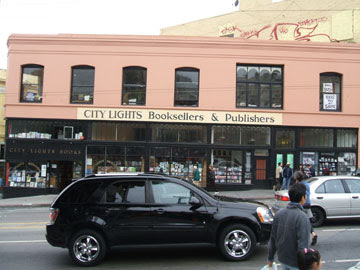 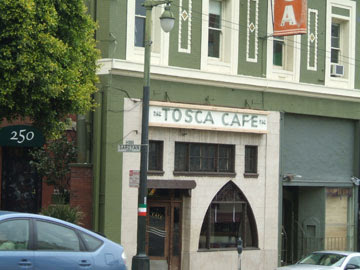 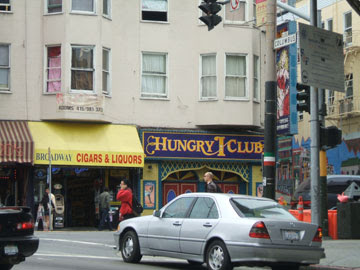 Mort Sahl made reading the paper and riffing on the headlines hip.
Lenny Bruce once said he was going to change all the papers within six blocks of Sahl's hotel so that Mort would begin his act with, "How about that Hindenbergh?" 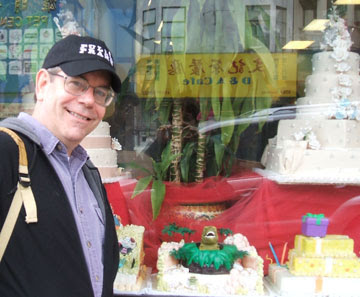 We had lunch in Chinatown in a little place that was pleasantly loud with women and children and I had a great bowl of noodle soup. Jenny ordered a BLT and asked if it came with mayonnaise and the waitress smiled and pointed to the menu. It did come with mayonnaise. This is America, after all.
(But why Jenny ordered a BLT in Chinatown is a mystery.)
This is the window of the place where an indoor sign proclaimed "The Magic of Cakes!" Notice the T-Rex. 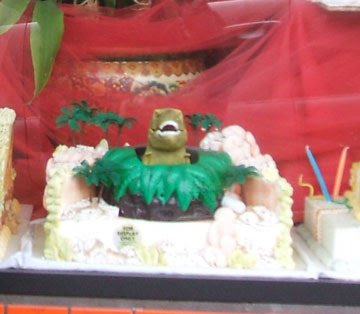 Now that's a cake. Tomorrow, we'll see some of the people we're meeting. A little late in the trip I thought it would be nice to have some of their faces. It's a shame I'm too late to show you Claire and Tracy, two girls from Ireland on a two-month adventure in America. They were beautiful and those accents will make any American boy melt.
Bob and Carol from Kansas City (I was tempted to introduce us as Ted and Alice, but thought better of it) who hesitantly opened the topic of politics and, once they found we were kindred souls, jumped in with both left feet.
I also missed Debra and Steve at Blues and Biscuits, the folks from Huntington Beach we met at dinner, and John at the Beat Museum.
A guy whose named I missed played a recording of Jack Kerouac reading one of my favorite pieces, October in the Railroad Earth over Steve Allen's meandering jazz piano. As I was listening, I was surprised to hear the same rhythms I hear in Chandler and it blew me away. I'd never put those two writers together, but there it was. The words were different but the melody was very much the same. It made me appreciate the cultural cultural stew we all swim in with a new ear. What a treat.

I'm seeing connections all over the damn place. More tomorrow.
Posted by David Terrenoire at 10:32 AM

North Beach is a blast. Late night during fleet week is a sight to behold lemme tell ya.

Glad you're having fun.

I want that cake.