A once in a lifetime opportunity. 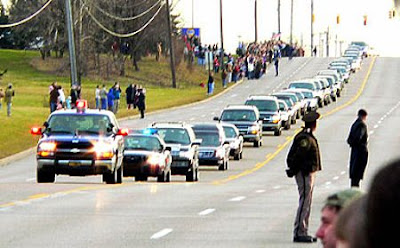 I left work yesterday and settled in for my usual 40 minute commute home. Paul Butterfield was blowing a harp solo on the box and traffic was its usual rush hour pack of swift moving automobiles.

About 4 miles from the airport, traffic began to slow. I saw a few police cars blocking an exit and figured there was an accident. As I-40 swept up past the Wade Avenue exit, I saw that the opposite lanes of the Interstate, usually bumper to bumper this time of day, were empty. Not a car in sight. It was like a scene from On The Beach. Spooky.

Our westbound lanes continued on as usual. It was only the eastbound lanes that were abandoned of all commuter life. Then, lights flashing, two motorcycle cops came toward us. They were followed by more cops on bikes. Then an EMT truck. Behind that, a long line of black SUVs.

I got into the left lane, closest to the oncoming motorcade. I let the black SUVs get closer. I knew who was sitting behind one of those darkened windows and I knew I would never have this opportunity again.

As the motorcade pulled opposite, I held up my middle finger. It was only for a moment, but in that brief flash of the single digit, I got to tell George W. Bush, America's petite dauphin, exactly what I thought of the way he's handled his office.

And it felt good. It felt damn good.

When a regular guy, commuting home after a long week at work, gets to flip off the most powerful man in the world, it just reminds me why I fly the flag every 4th of July.

Damn, I love this country.

Have a good weekend.

Posted by David Terrenoire at 9:31 AM

I may not agree with all of your political views, but I think we both agree that it's nice to live in a country where you can flip off the president.

Thanks, Graham. It really is what I love best about this country. Hell, I've been writing this blog for over two years without getting arrested. My wife is amazed.

I was invited to meet Bill Clinton, twice in the last few months. I declined both times, for essentially the same reasons you flipped off GWB. Yes I love this country too, which is why I hate the so called patriot act. If you live free, you risk the dangers of this world, but you live fully.

My son got the opportunity to meet GWB; face up, person to person. He took it, even though he doesn't like him. He just wanted to be able to mention that he had met and shook hands with the President of the United States. He loves this country too.

Any idea how many countries our blogs are banned or filtered out in?

Nice work. You should have used both middle fingers...

"Any idea how many countries our blogs are banned or filtered out in?"

English-speaking countries? None. You Americans start learning other languages, though, and that could really shake up the world ;)

(I do imagine quite a few countries disable all online translators...)